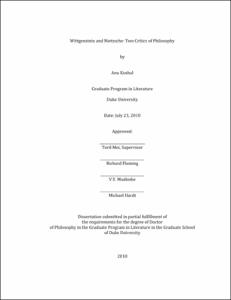 Few philosophers have been more critical of the Western philosophical tradition than Friedrich Nietzsche and Ludwig Wittgenstein. Nietzsche and Wittgenstein did not just reject the conclusions of their philosophical predecessors; they rejected their most basic assumptions. They rejected the very idea of philosophy as the attempt to rationally develop objective theories of the world. And yet Wittgenstein and Nietzsche have now been absorbed into the discipline they wanted to abolish. This dissertation attempts to recapture the force and extent of their respective criticisms of philosophy, and evaluate their conceptions of what philosophy should be.

I begin by examining Wittgenstein's claim that philosophical problems rest on a misunderstanding of language. I show that this claim does not entail a quietist refusal to engage in philosophical problems, as many have argued. Rather, it offers new insights into these problems, and I demonstrate these insights by considering Wittgenstein's analysis of G.E. Moore's attempt to refute external world skepticism. In the case of Nietzsche, I argue that his criticism of philosophy extends beyond the metaphysics of Plato, Descartes, and Kant to include even those anti-metaphysical philosophical movements with which he is now associated: post-structuralism and naturalism. In this way, his criticism of philosophy is more extensive than has been recognized. I conclude by describing his alternative conception of philosophy as the creation of new concepts, and compare it with Wittgenstein's conception of assembling reminders of what we ordinarily say.