Application of Game Theory Analysis in Epidemiology and Service Management 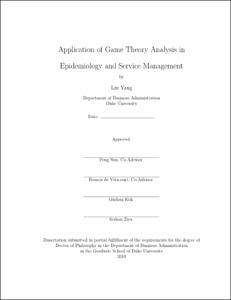 The first model considers the drug allocation problem when facing the outbreak of an international influenza pandemic. The drugs are for prophylactic use. Since drug stockpiles are presently scattered in different countries, the outbreak of an epidemic gives rise to a game in which each country must make decisions about how best to allocate its own stockpile in order to protect its population. We develop a two-period multivariate Reed-Frost model to represent the spread of the epidemic within and across countries at its onset. We show that for small probability of between-country infections, the underlying game is supermodular and that a unique Pareto optimal Nash equilibrium exists. Further, we identify sufficient conditions under which the optimal solution of a central planner constitutes a Pareto improvement over the decentralized equilibrium.