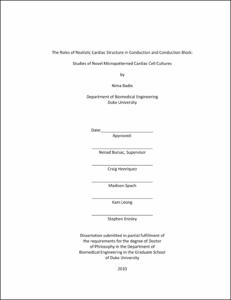 The role of cardiac tissue structure in both normal and abnormal impulse conduction has been extensively studied by researchers in cardiac electrophysiology. However, much is left unknown on how specific micro- and macroscopic structural features affect conduction and conduction block. Progress in this field is constrained by the inability to simultaneously assess intramural cardiac structure and function, as well as the intrinsic complexity and variability of intact tissue preparations. Cultured monolayers of cardiac cells, on the other hand, present a well-controlled in vitro model system that provides the necessary structural and functional simplifications to enable well-defined studies of electrical phenomena. In this thesis, I developed a novel, reproducible cell culture system that accurately replicates the realistic microstructure of cardiac tissues. This system was then applied to systematically explore the influence of natural structure (e.g. tissue boundaries, expansions, local fiber directions) on normal and arrhythmogenic electrical conduction.

To elucidate the roles that natural tissue structure play in arrhythmogenesis, I applied rapid-rate pacing from multiple sites in culture in an attempt to induce unidirectional conduction block remote from the pacing site--a precursor to reentry. The incidence of remote block was found to be highly dependent on the direction of wave propagation relative to the underlying tissue structure, and with a susceptibility that was synergistically increased by both realistic tissue boundaries and fiber directions. Furthermore, all instances of remote block in these micropatterned cultures occurred at the anterior and posterior junctions of the septum and right ventricular free wall. At these sites, rapid excitation yielded more abrupt conduction slowing and promoted wavefront-waveback interactions that ultimately evolved into transmural lines of conduction block. The location and shape of these lines of block was found to strongly correlate with the spatial distribution of the electrotonic source-load mismatches introduced by ventricular structures, such as tissue expansions and sharp turns in fiber direction.

In summary, the overall objective of the work described in this thesis was to reveal the distinct influences of realistic cardiac tissue structure on action potential conduction and conduction block by engineering neonatal rat cardiomyocyte monolayers that reproducibly replicated the anatomical details of murine ventricular cross-sections. In the future, this novel model system is expected to further our understanding of structure-function relationships in normal and structurally diseased hearts, and possibly enable the development of novel gene, cell, and ablation therapies for cardiac arrhythmias.