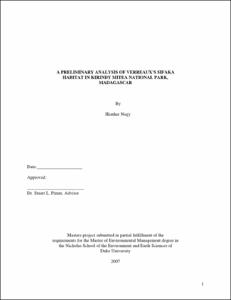 View / Download
4.4 Mb
Date
Author
Nagy, Heather
Advisor
Pimm, Stuart L.
Repository Usage Stats
691
views
1,316
downloads
Abstract
Kirindy Mitea National Park contains one of the largest continuous tracts of dry forest left in Madagascar. Most of the dry, deciduous forest of western Madagascar is degraded and fragmented after years of deforestation from slash and burn agriculture and logging. Kirindy Mitea is a new research site, so little is known about the park as a whole and the species living there. This focal species of this project is the park’s largest lemur, Verreaux’s sifaka (Propithecus verreauxi verreauxi). The goals of this project were to determine the average home range size and group size of the species in Kirindy Mitea, and then compare those numbers to two other sites in southwestern Madagascar, Beza Mahafaly Special Reserve and Kirindy Forest/CFPF. In addition, GIS analyses were performed to look at the land cover changes that took place in Kirindy Mitea during a 16 year period. The results of that analysis were used to perform a GIS based threat analysis of the forest in the park, in order to determine what areas are at the highest risk of deforestation in the future. I found that the average home range size of Verreaux’s sifaka in Kirindy Mitea is larger than the average home range sizes in Beza Mahafaly and Kirindy CFPF (p=0.010). In addition, the home ranges have less overlap with neighboring groups in Kirindy Mitea, most likely due to a difference in habitat and a lack of tamarind trees. The land cover change analysis revealed that during 1990-2006, there has actually been a gain of over 4,000 ha of forest. However, during the most recent time period, 2000-2006, there was an overall loss of almost 2,000 ha of forest, and these areas of forest loss were concentrated around the park boundary and the savanna. The threat analysis determined that the factors that will most likely lead to deforestation in the future in Kirindy Mitea are proximity to the park boundary, the roads in the park, and the savanna. Using the results of the threat analysis, I was able to determine that about 10,500 ha of viable lemur habitat in the park is at high risk of deforestation in the future. Currently, the forest in Kirindy Mitea is quite continuous, and there is an adequate amount left to support large lemur species like Verreaux’s sifaka. It will be important for park managers to continue protecting the forest so that it does not become fragmented like most of the dry forest left in Madagascar. I recommend creating a buffer area around the park boundary and investing in additional security and park staff to monitor the remaining forest around the park boundary and near roads and savanna. Kirindy Mitea is a rare park in that it actually contains a large amount of continuous forest, so conserving those remaining large tracts of forest should be a top priority for park managers.
Type
Master's project
Department
Nicholas School of the Environment and Earth Sciences
Subject
Kirindy Mitea National Park
Madagascar
Sifaka (Propithecus verreauxi verreauxi)
Kirindy Mitea
Geographic Information System (GIS)
Permalink
https://hdl.handle.net/10161/304
Citation
Nagy, Heather (2007). A PRELIMINARY ANALYSIS OF VERREAUX’S SIFAKA HABITAT IN KIRINDY MITEA NATIONAL PARK, MADAGASCAR. Master's project, Duke University. Retrieved from https://hdl.handle.net/10161/304.
Collections
More Info
Show full item record