The Labor of Writing in the Pastoral Genre: Philip Sidney's Arcadia through John Milton's Paradise Lost 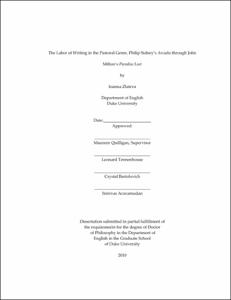 I argue that the pastoral genre is a literary response to changes in the agrarian economy as landed property is freed from older notions of obligation and political dependence on the monarch. Thus, the Renaissance English pastoral can be read as a cultural form that corresponds to agrarian capitalism and a moment of release of land and natural resources from their embeddedness within local communal formations before they are incorporated into a larger concept of Englishness. While the genre of the pastoral is ostensibly resisting the pressures of modernity - i.e. the corrupting influence of trade and urban life - what struck me is that it does so in ways that look distinctly modern to us, through affirmation of independent forms of intellectual and agrarian labor.