Localization of Dynamic Acoustic Sources with a Maneuverable Array 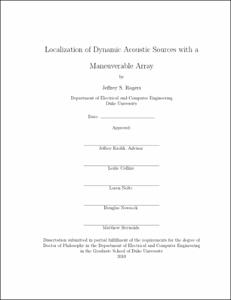 This thesis addresses the problem of source localization and time-varying spatial spectrum estimation with maneuverable arrays. Two applications, each having different environmental assumptions and array geometries, are considered: 1) passive broadband source localization with a rigid 2-sensor array in a shallow water, multipath environment and 2) time-varying spatial spectrum estimation with a large, flexible towed array. Although both applications differ, the processing scheme associated with each is designed to exploit array maneuverability for improved localization and detection performance.

The second application addresses the problem of field directionality mapping (FDM) or spatial spectrum estimation in dynamic environments with a maneuverable towed acoustic array. Array processing algorithms for towed arrays are typically designed assuming the array is straight, and are thus degraded during tow ship maneuvers. In this thesis, maneuvering the array is treated as a feature allowing for left and right disambiguation as well as improved resolution towards endfire. The Cramer Rao lower bound is used to motivate the improvement in source localization which can be theoretically achieved by exploiting array maneuverability. Two methods for estimating time-varying field directionality with a maneuvering array are presented: 1) maximum likelihood estimation solved using the expectation maximization (EM) algorithm and 2) a non-negative least squares (NNLS) approach. The NNLS method is designed to compute the field directionality from beamformed power outputs, while the ML algorithm uses raw sensor data. A multi-source simulation is used to illustrate both the proposed algorithms' ability to suppress ambiguous towed-array backlobes and resolve closely spaced interferers near endfire which pose challenges for conventional beamforming approaches especially during array maneuvers. Receiver operating characteristics (ROCs) are presented to evaluate the algorithms' detection performance versus SNR. Results indicate that both FDM algorithms offer the potential to provide superior detection performance in the presence of noise and interfering backlobes when compared to conventional beamforming with a maneuverable array.