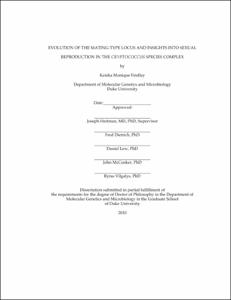 Sexual reproduction in fungi is governed by a specialized genomic region called the mating-type locus (MAT). The ascomycetes, the largest phylum of fungi, primarily possess a bipolar mating system while the basidiomycetes, the second largest group, are mostly tetrapolar. The human fungal pathogen and basidiomycetous yeast Cryptococcus neoformans has evolved a bipolar mating system that encodes homeodomain (HD) and pheromone/receptor (P/R) genes. The MAT locus of C. neoformans is unusually large, spans greater than 100 kb, and encodes more than 20 genes. To understand how the pathogenic Cryptococcus species complex evolved this unique bipolar mating system, we investigated the evolution of MAT in closely and distantly related species and discovered an extant sexual cycle in Cryptococcus amylolentus.

Phylogenetic analysis using a six-gene multi-locus sequencing (MLS) approach identified the most closely related species to the pathogenic Cryptococcus species complex that are currently known. The two non-pathogenic sibling species, Tsuchiyaea wingfieldii and Cryptococcus amylolentus, and the more distantly related species Filobasidiella depauperata define the Filobasidiella clade. We also resolved the phylogeny of the species located in the sister clade, Kwoniella. A comprehensive tree dendrogram revealed that the 15 Tremellales species examined suggests a common saprobic ancestor. Moreover, the pathogenic Cryptococcus species have a saprobic origin but later emerged as pathogens. We further characterized the mating-type locus for T. wingfieldii and C. amylolentus by cloning and sequencing two unlinked genomic loci encoding the HD and P/R genes. Interestingly, linked and likely divergently transcribed homologs for SXI1 and SXI2 are present in T. wingfieldii and C. amylolentus, while the P/R alleles contain many genes also found in the MAT locus of the pathogenic Cryptococcus species. Also, hypothetical genes present in C. neoformans MAT are also MAT-linked in both species and indicate a possible translocation event between chromosomes 4 and 5 of C. neoformans. Our analysis of MAT in the sibling species indicates that T. wingfieldii is likely tetrapolar, and the C. amylolentus sequence comparison of the dimorphic SXI1 and SXI2 region and the pheromone receptor, STE3, suggests that C. amylolentus is also tetrapolar. The examination of MAT in these sibling species confirms the model for MAT evolution previously proposed in which this structure in C. neoformans and C. gattii evolved from an ancestral tetrapolar mating system. Moreover, the organization of MAT in these sibling species mirrors key aspects of the proposed intermediates in the evolution of MAT in the pathogenic Cryptococcus species, and for sex chromosomes in plants, animals, and alga in general.

We discovered an extant sexual cycle for C. amylolentus, a species previously thought to be asexual. Matings between two strains of opposite mating-types produce dikaryotic hyphae with fused clamp connections and uni- and bi-nucleate basidiospores. Genotyping of basidiospores using markers linked and unlinked to MAT revealed that genetic exchange (recombination) occurs during the sexual cycle of C. amylolentus, and it is likely that either aneuploids are generated during sex or more than one meiosis event occurs within each basidium. This is in contrast to C. neoformans, where only one meiotic event per basidium has been observed. Uniparental mitochondrial inheritance has also been observed in C. amylolentus progeny; similar to the pathogenic Cryptococcus species, mtDNA is inherited from the C. amylolentus MATa parent. Analysis of sex in C. amylolentus has provided insight into the mechanisms that phylogenetically related fungi employ in orchestrating sexual reproduction.

We also extended our analysis to include the distantly related tetrapolar basidiomycete Tremella mesenterica. We completed comparisons of MAT-specific genes between five strains of T. mesenterica and identified the regions that define its mating-type system. The HD locus is limited to the SXI1- and SXI2-like genes while the P/R locus is defined by STE3, STE12, STE20, and the pheromone gene, tremerogen a-13. Interestingly, many of the genes associated with the MAT locus of the pathogenic Cryptococcus species flank the HD and P/R locus and are not incorporated in MAT in T. mesenterica. The MAT region includes transposons and C. neoformans hypothetical genes also present in T. wingfieldii and C. amylolentus. The mating-type system in T. mesenterica reflects an ancestral intermediate in the evolution of the MAT locus in the pathogenic Cryptococcus species. In conclusion, this study provides an in-depth analysis on the structure, function, and evolution of an unusual mating-type locus with broader implications for the transitions in modes of sexual reproduction in fungi that impact gene flow in populations.