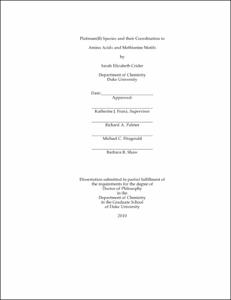 Human and yeast analogs of a high affinity copper transport protein (hCtr1 and yCtr1) have been implicated in the transport of platinum-based drugs in cells. Using liquid chromatography and mass spectrometry, we have compared the binding interactions between cisplatin, carboplatin and oxaliplatin with synthetic peptides corresponding to the methionine-rich regions of hCtr1 that encompass amino acid residues 7-14 (MGMSYMDS) and 39-46 (MMMMPMTF). Incubation of cisplatin, cis-diamminedichloroplatinum(II), with a peptide species containing a single methionine results in the loss of 1 or 2 chloride ligands of cisplatin upon coordination of the Pt center to the thioether of methionine and a backbone amide. The interactions of cisplatin and carboplatin with Met-rich motifs containing three or more methionines result in removal of the carrier ligands of both platinum complexes. These results imply that the interaction of cisplatin with methionine-rich regions of hCtr1 alters the drug in such a way that it is no longer in its active form. In contrast, in the presence of a peptide corresponding to residues 39-46 containing 5 methionines, oxaliplatin retains its cyclohexyldiamine ligand upon platinum coordination to the peptide. This result indicates that should oxaliplatin utilize hCtr1 to enter a cell, the drug could remain in its active form.

In an effort to exploit the interactions of Pt(II) species with methionine, a second project focused on the development of a fluorescent Pt(II) species that selectively coordinates methionine-rich motifs. The syntheses of multinuclear Pt(II) and Ru(II)-Pt(II) complexes containing 2,3-bis(2-pyridyl)pyrazine (dpp) as a bridging ligand were carried out and their coordination to sulfur containing amino acids and bovine serum albumin were explored using UV-Vis and Fluorescence Spectroscopy techniques. The coordination of methionine, cysteine and histidine to [Ru(II)[(Pt(II)Cl2dpp))3] results in the removal of the Pt(II)Cl2 moieties from [Ru(II)(dpp)3]. As a consequence, dpp should not be incorporated into a Pt(II) species for the development of a met-specific fluorescent Pt(II) complex.

The discovery of interactions of Pt(II) species with methionine-rich portions of proteins has opened the door for the development of Pt(II) fluorescent species that could potentially coordinate to proteins with specificity for methionine-motifs. The syntheses of multinuclear Pt(II) complexes, using 2,3-bis(2-pyridyl)pyrazine (dpp) as a bridging ligand were carried out and their coordination to sulfur containing amino acids and bovine serum albumin were explored using UV-Vis and Fluorescence Spectroscopy techniques.