Development of Nanosensor to Detect Mercury and Volatile Organic Vapors 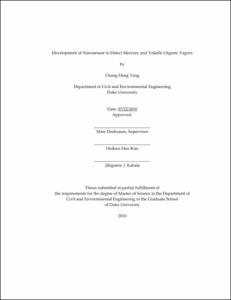 Nanosensors made of conducting polypyrrole (PPY) and tin dioxide (SnO2) on SWNTs were tested for the detection of volatile organics such as benzene, methyl ethyl ketone (MEK), hexane and xylene. The greater sensitivity of these two sensors to lower analytes concentrations compared to previous research studies was demonstrated. Experiments were conducted at room temperature, and the response was shown to be fast and highly sensitive to low concentration of VOCs. Using PPY and SnO2 sensors in a sensor array can identify polar and nonpolar analytes. Sensing mechanisms of these two sensors to analytes are discussed in this thesis.

Further work to improve the sensors that were tested was identified. The main challenge of this sensor is that the response and regeneration time is relatively slow at room temperature, especially for Au nanoparticle sensors. Also, with respect to PPY and SnO2 nanosensors, a high reproducibility in the making of sensors is desired. This improvement can help PPY and SnO2 sensors to have consistency. Finally, since nanosensors that can detect VOCs are not very specific, array sensing and numerical methods that can be used to quantify individual compounds in mixture from nanosensors array data are needed.