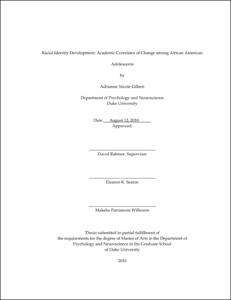 This study examined changes in African American adolescents' racial identity content (e.g., connectedness, awareness of racism, and embedded achievement) and academic adjustment (e.g., Academic and disciplinary adjustment, perceptions of school and teachers, and relationship with school peers) between early and late adolescence. Data analyzed were from a subsample of youth (N = 514) who participated in the multi-site Fast Track Project designed to prevent problem behaviors (e.g., disruptive, aggressive, and antisocial behavior). Results from latent growth curve models suggest that connectedness and embedded achievement remain stable across adolescence. However, awareness of racism increases from early to late adolescence and this increase is linked to declining self reported relationships with school peers. These findings also indicate that the relationship between racial identity and academic adjustment is moderated by gender. For girls, awareness of racism predicted negative peer relationships in early adolescence, but not across the study years. For boys, increasing awareness of racism predicted declines in peer relationships across adolescence. The present findings contribute to the understanding of adolescent racial identity content change.