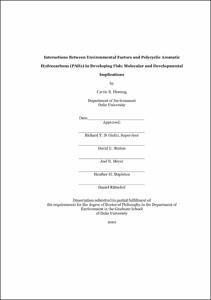 Aquatic systems are impacted by a wide variety of natural and anthropogenic stressors. Laboratory studies often focus on impacts of a single stressor, ignoring how these stressors may interact. This dissertation focuses on the interactions between polycyclic aromatic hydrocarbons (PAHs) and two physical stressors (hypoxia and solar radiation). PAHs are ubiquitous environmental pollutants that occur in the environment as complex mixtures, the components of which may interact. Some PAHs are agonists of the aryl hydrocarbon receptor (AhR), which regulates expression of a number of genes (such as CYP1A) involved in metabolism, often of the same compounds that induced the AhR. PAHs that are AhR agonists have been shown to interact synergistically with PAHs that inhibit activity of CYP1A, inducing developmental deformities in fish. AhR shares a dimerization partner, the aryl hydrocarbon receptor nuclear translocator (ARNT), with the protein responsible for regulating hypoxia-induced gene expression, hypoxia-inducible factor 1á (HIF1&alpha;), possibly resulting in competition between the two pathways. Competition would result in decreased induction of CYP1A under hypoxic conditions, possibly resulting in synergistic embryonic toxicity between AhR agonist PAHs and hypoxia. In this dissertation, the results are presented of experiments regarding the occurrence of AhR/HIF1&alpha; crosstalk in fish and the developmental consequences of co-exposure to hypoxia and PAHs. In vitro testing revealed competition for ARNT in which HIF1&alpha; appeared to out-compete AhR. Induction of an AhR-responsive luciferase reporter by several AhR agonists (benzo[a]pyrene (BaP), benzo[k]fluoranthene (BkF), and polychlorinated biphenyl (PCB126)) was reduced under hypoxia and this effect was eliminated by overexpression of ARNT. Induction of a HIF1&alpha;-responsive reporter was unaffected by BkF and PCB126. BaP caused an ARNT-independent decrease in both basal and induced HIF1&alpha; reporter activity. Attempts to verify this crosstalk pattern in vivo revealed that BaP-induced CYP1A expression was further increased under hypoxic conditions. Induction of hypoxia-inducible genes VEGF and LDHa were unaffected by BaP. The effect of hypoxia on CYP1A expression was not repeated with BkF or pyrene (PY) and the exact conditions that result in hypoxic changes in CYP1A expression remain to be determined. Embryonic toxicity in zebrafish (Danio rerio), including pericardial edema, heart malformations, and death were synergistically induced by hypoxia and BaP, BkF or complex, environmentally relevant PAH mixtures. There was no effect of hypoxia on PCB126 toxicity and hypoxia protected from the pericardial edema induced by PY. CYP1A knockdown mimicked the effects of hypoxia on BkF and PY toxicity and even further exacerbated BkF toxicity under hypoxic conditions, suggesting a role for metabolism in the toxicity. Additionally, since two CYP1A inhibitors (fluoranthene (FL) and á-naphthoflavone (ANF)) had been previously reported to interact synergistically with hypoxia, three other CYP1A inhibitors (dibenzothiophene, carbazole and 2-aminoanthracene) were tested. None of them induced toxicity in combination with hypoxia, indicating that CYP1A inhibition was not the reason for the interaction of FL and ANF with hypoxia.

A second stressor known to interact with PAHs to induce toxicity is solar radiation. While most studies of the effects of solar radiation on PAH toxicity have focused on the effects of UV light on PAHs already absorbed by an organism (photoactivation), less attention has been paid to the toxic effects of photomodified PAHs. We exposed carbazole to ambient sunlight and subsequently exposed developing zebrafish to the resulting mixture. Photo-exposed carbazole caused developmental toxicity including edema, heart malformations, craniofacial malformations and death that were not caused by parent carbazole; these effects were severely exacerbated by hypoxia and significant mortality was also observed. Additionally, photo-exposed carbazole induced expression of CYP1A and GSTp, likely resulting from agonism of the AhR and toxicity of this mixture was alleviated by morpholino knockdown of AhR. Some photoproducts were identified, but none of them appeared to be involved in the toxicity or supposed AhR induction observed with photoexposed carbazole. The results of these experiments underscore the importance of consideration of the interactive effects of physical and chemical stressors when assessing risks to wildlife populations inhabiting polluted areas.