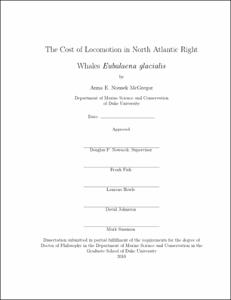 forces inherent in the environment. Most large marine vertebrates have evolved

a neutral position, but nearly all behaviors result in some increase in that force.

for population-level factors such as reproduction. The population of North Atlantic

right whales has not recovered following legal protection due to decreased fecundity,

an increase in the number of nulliparous females in the population. This reproductive

costs of reproduction. The goal of this study was to determine whether increases in

shift these whales into a situation of negative energy gain. The first step is to

suction-cupped archival tag. The data from the tags were used to quantify the oc-

ent blubber thicknesses. Next, the depth of surface dives made by animals of different

sizes was related to the depth where additional wave drag is generated. Finally, the

use of intermittent locomotion during foraging was investigated to understand how

much energy is saved by using this gait. The final piece in this study was to deter-

the tags and from two different numerical simulations of flow around whales. One, a

custom developed algorithm for multiphase flow, was used to determine the relative

drag, while a second commercial package was used to determine the absolute mag-

nitude of the drag force on the simplest model, the traveling animal. The resulting

water column. The time budgets and swimming movements during these behaviors

matched those in other species, enabling the dive shapes to be classified as foraging,

thinner blubber layers, consistent with the hypothesis that positive buoyancy does

influence their vertical diving behavior. During horizontal traveling, whales made

ditional costs due to wave drag. These dives appear to allow whales to both avoid

were found to glide for 12% of the bottom phases of their foraging dives, and the

continuous swimmers. Drag coefficients estimated from these glides had an average

of 0.014 during foraging dives and 0.0052 during traveling, values which fall in the

range of those reported for other marine mammals. One numerical simulation deter-

mined drag forces to be comparable, while the other drastically underestimated the

drag of all behaviors. Finally, alterations to the behavioral budgets of these animals

negative energy balance. In summary, these results show that locomotor costs are no

from all the other stressors on this population, these whales are not on an energetic