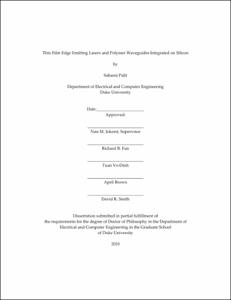 The integration of planar on-chip light sources is a bottleneck in the implementation of portable planar chip-scale photonic integrated sensing systems, integrated optical interconnects, and optical signal processing systems on platforms such as Silicon (Si) and Si-CMOS integrated circuits. A III/V on-chip laser source integrated onto Si needs to use standard semiconductor fabrication techniques, operate at low power, and enable efficient coupling to other devices on the Si platform.

These thin film EELs were also integrated with photolithographically patterned polymer (SU-8) waveguides on the same SiO2/Si substrate. Coupling of the laser and waveguide was compared for the cases where an air gap existed between the thin film laser and the waveguide, and in which one facet of the thin film laser was embedded in the waveguide. The laser to waveguide coupling was improved by embedding the laser facet into the waveguide, and eliminating the air gap between the laser and the waveguide. Although the Fresnel reflectivity of the embedded facet was reduced by embedding the facet in the polymer waveguide, leading to a 27.2% increase in threshold current density for 800 &mum long lasers, the slope efficiency of the L-I curves was higher due to preferential power output from the front (now lower reflectivity) facet. In spite of this reduced mirror reflectivity, threshold current densities of 260 A/cm<super>2</super> were achieved for 1000 &mum long lasers. This passively aligned structure eliminates the need for precise placement and tight tolerances typically found in end-fire coupling configurations on separate substrates.