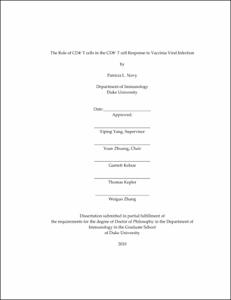 The role of CD4 T cell help in primary and secondary CD8 T cell responses to infectious pathogens remains incompletely defined. The primary CD8 T response to infections was initially thought to be largely independent of CD4 T cells, but it is not clear why some primary, pathogen-specific CD8 T cell responses are CD4 T cell-dependent. Furthermore, although the generation of functional memory CD8 T cells is CD4 T cell help-dependent, it remains controversial when the "help" is needed. The goal of this thesis project is to determine requirement and mechanisms of CD4 help during the CD8 response to vaccinia viral (VV) infection.

Given that CD4 T cell help is critical for the survival of activated CD8 T cells during both the primary and memory recall responses, it is still unclear how CD4 T cell help promotes CD8 T cell survival. The second aim of this project was to determine the mechanism of CD4 help for the survival of activated CD8 cells. We first showed that CD4 help in vitro was mediated by IL-21, a cytokine produced predominantly by activated CD4 T cells. We then demonstrated direct action of IL-21 on CD8 T cells was critical for the VV-specific CD8 T cell response in vivo. This intrinsic IL-21 signaling was essential for the survival of activated CD8 T cells and the generation of long-lived memory cells. We further revealed that IL-21 promoted CD8 T cell survival in a mechanism dependent on activation of the STAT1 and STAT3 pathways and subsequent upregulation of the pro-survival molecules Bcl-2 and Bcl-xL. Collectively, these results identify a critical role for CD4-derived IL-21 signaling in CD8 T cell responses to acute VV infection in vivo and may help design effective vaccine strategies in situations where CD4 cells are not fully functional.