Political Cinema: The Historicity of an Encounter 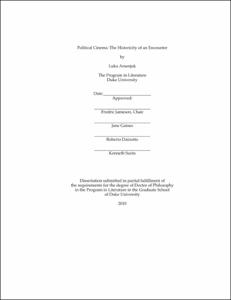 The basic question of "Political Cinema: The Historicity of an Encounter" is whether or not it is possible to think a concept of political cinema while affirming the autonomous capacities of both cinema as an art and politics as the thought of collective self-determination. Is it, in other words, possible to elaborate a relationship between cinema and politics that would at the same time establish a separation between the two and thus refuse to reduce one to the other. Such a relation of separation is called an encounter. Cinema encounters politics insofar as politics affects it and insofar as cinema can produce certain political effects, but also only insofar as cinema itself is immanently capable of configuring this relationship to politics. Following this conviction, the question of political cinema has to be considered at a distance from questions of genre, where political cinema would be merely one among other cinematic genres, and distinguished from the problem of political instrumentalization of cinema (propaganda). Political cinema refers to real cinematic inventions that happen in relation to processes of human emancipation.

"Political Cinema" tests this basic conviction through four separate case studies. These case studies are limited and local analyses, which nevertheless cover a broad historical background and are, furthermore, meant as concrete points from which more general theoretical questions can be addressed and formulated. The introductory statement (Chapter 1) sets up the theoretical stakes of the dissertation. Part I analyzes the Soviet filmmaker Sergei Eisenstein's appropriation of several elements of laughter - comedy, militant humor, carnival, caricature and satire, etc. - as specifically cinematic means Eisenstein used to bring his films as closely as possible to the revolutionary process of the October Revolution and the break the latter introduced into the history of humanity. Part II of the dissertation (Chapters 3 and 4), presents a discussion (primarily on the example of Charlie Chaplin's Modern Times) of the figure of the worker as a forceful cinematic symbolization of the existence of the modern proletarian masses, through the creation of which, however, cinema does not give up the effective autonomy of its expression. Part III, which consists of an analysis of the work of the Palestinian director Michel Khleifi, shows how the filmmaker's strategy of blurring the boundary between documentary and fiction is an artistic procedure (a cinema of "documentary fiction") that makes visible the complexity of Palestinian historical experience and memory, but does so at a distance from any direct political discourse on the question of Palestine (Chapter 5). And finally, the Conclusion to the dissertation, presents an analysis of the recent Romanian film, which renders visible striking new ideas of political cinema that are, however, produced in the absence of anything more than mere traces of what deserves to be called politics (Chapter 6)