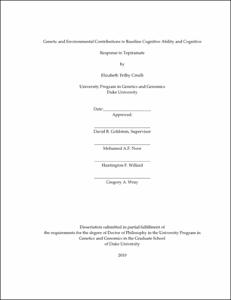 Although much research has focused on cognitive ability and the genetic and environmental factors that might influence it, this aspect of human nature is still far from being well understood. It has been well-established that certain factors such as age and education have significant impacts on performance on most cognitive tests, but the effects of variables such as cognitive pastimes and strategies used during testing have generally not been assessed. Additionally, no genetic variant has yet been unequivocally shown to influence the normal variation in cognitive ability of healthy individuals. Candidate gene studies of cognition have produced conflicting results that have not been replicable, and genome-wide association studies have not found common variants with large influences on this trait.

Here, we have recruited a large cohort of healthy volunteers (n=1,887) and administered a brief cognitive battery utilizing diverse, common, and well-known tests. In addition to providing standard demographic information, the subjects also filled out a questionnaire that was designed to assess novel factors such as whether they had seen the test before, in what cognitive pastimes they participated, and what strategies they had used during testing. Linear regression models were built to assess the effects of these variables on the test scores. I found that the addition of novel covariates to standard ones increased the percent of the variation in test score that was explained for all tests; for some tests, the increase was as high as 70%.

Next, I examined the effects of genetic variants on test scores. I first performed a genome-wide association study using the Illumina HumanHap 550 and 610 chips. These chips are designed to directly genotype or tag the vast majority of the common variants in the genome. Despite having 80% power to detect a common variant explaining at least 3-6% (depending on the test) of the variation in the trait, I did not find any genetic variants that were significantly associated after correction for multiple testing. This is in line with the general findings from GWA studies that single common variants have a limited impact on complex traits.

Because of the recent technological advances in next-generation sequencing and the apparently limited role of very common variants, many human geneticists are making a transition from genome-wide association study to whole-genome and whole-exome sequencing, which allow for the identification of rarer variants. Because these methods are currently costly, it is important to utilize study designs that have the best chance of finding causal variants in a small sample size. One such method is the extreme-trait design, where individuals from one or both ends of a trait distribution are sequenced and variants that are enriched in the group(s) are identified. Here, I have sequenced the exomes of 20 young individuals of European ethnicity: 10 that performed at the top of the distribution for the cognitive battery and 10 that performed at the bottom. I identified rare genetic variants that were enriched in one extreme group as compared to the other and performed follow-up genotyping of the best candidate variant that emerged from this analysis. Unfortunately, this variant was not found to be associated in a larger sample of individuals. This pilot study indicates that a larger sample size will be needed to identify variants enriched in cognition extremes.

Finally, I assessed the effect of topiramate, an antiepileptic drug that causes marked side effects in certain cognitive areas in certain individuals, on some of the healthy volunteers (n=158) by giving them a 100 mg dose and then administering the cognitive test two hours later. I compared their scores at this testing session to those at the previous session and calculated the overall level to which they were affected by topiramate. I found that the topiramate blood levels, which were highly dependent on weight and the time from dosing to testing, varied widely between individuals after this acute dose, and that this variation explained 35% of the variability in topiramate response. A genome-wide association study of the remaining variability in topiramate response did not identify a genome-wide significant association.