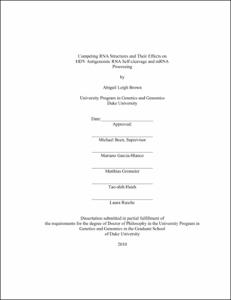 HDV antigenomic RNA is processed in two distinct pathways; it can be cleaved at the polyA site and polyadenylated to become mRNA for the delta antigens, or the RNA can be cleaved by the antigenomic ribozyme to become full-length antigenomic RNA that is used for synthesis of genomic HDV RNA. The polyA site is located just 33 nucleotides upstream of the ribozyme cleavage site. If processing occurs primarily at the upstream polyA site, there may not be enough full-length antigenomic RNA to support replication. On the other hand, ribozyme cleavage downstream of the polyA site could inhibit polyadenylation by interfering with polyadenylation complex assembly. Thus, it appears that HDV may need a mechanism to control RNA processing so that both products can be generated in the proper amounts during the infection cycle.

A model has been proposed in which the choice between ribozyme cleavage and polyadenylation is determined by alternative RNA secondary structures formed by the polyA sequence (Wadkins and Been 2002). One of the hypothetical structures, AltP2, is a pairing between part of the upstream polyA sequence and the 3' end of the ribozyme sequence. For this model, the same upstream sequence that forms AltP2 could also form a stem loop, P(-1), within the leader, by pairing with sequences located farther upstream. A processing choice is possible because AltP2 is predicted to inhibit ribozyme cleavage and favor polyadenylation resulting in mRNA production, whereas P(-1) would inhibit polyadenylation and favor ribozyme cleavage resulting in full-length replication product.

The P(-1) vs. AltP2 model was tested using an antigenomic HDV ribozyme construct with the 60-nucleotide sequence upstream of the ribozyme cleavage site. This leader sequence contains the proposed polyA sequence elements. In vitro analysis of this construct revealed that the kinetic profile of ribozyme self-cleavage was altered in two ways. Relative to the ribozyme without upstream sequences, the fraction of precursor RNA that cleaved decreased to about 50%, but the active ribozyme fraction cleaved faster. Native gel electrophoresis revealed that the active and inactive precursor RNAs adopted persistent alternative structures, and structure mapping with Ribonuclease T1 and RNase H provided evidence for structures resembling P(-1) and AltP2.

Sequence changes in the 5' leader designed to alter the relative stability of P(-1) and AltP2 increased or decreased the extent of ribozyme cleavage in a predictable way, but disrupting AltP2 did not completely restore ribozyme activity. The analysis of deletion and base change variants supported a second alternative pairing, AltP4, formed by the pyrimidine-rich sequence immediately 5' of the ribozyme cleavage site and a purine-rich sequence from the 5' side of P4. A similar approach was used to test if the effect of disrupting both AltP2 and AltP4 might be additive, and the results suggested that ribozyme precursors with 5' leader sequences could fold into multiple inactive conformations, which can include, but may not be limited to, AltP2, AltP4, or a combination of both.