The Evolution and Genetics of Reinforcement in Phlox Drummondii 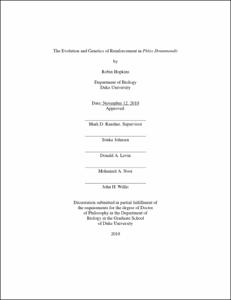 One of the major goals of evolutionary biology is understanding the process of species formation. There is particular interest in how selection can favor species formation through the process of reinforcement. When two diverging taxa produce maladaptive hybrids, selection will favor greater reproductive isolation between the taxa. Reinforcement often results in a pattern of reproductive character displacement, which is defined as two species having greater reproductive isolation in sympatry then in allopatry. Floral-color divergence in the native Texas wildflower, Phlox drummondii, constitutes one of the best documented cases of reinforcement in plants. P. drummondii and a closely related species, P. cuspidata produce similar light-blue flowers throughout the allopatric parts of their ranges. However, in the area of sympatry P. drummondii has dark-red flowers, which has been shown to decrease hybridization between the two species. In the following work, I investigate the causes and consequences of the process of reinforcement and the pattern of character displacement in P. drummondii. First, I identify the genetic basis of the flower color variation as regulatory changes in two genes controlling the type and amount of anthocyanin floral pigments. I then evaluate neutral genetic variation across the range of P. drummondii and conclude there is extensive gene flow between allopatric and sympatric areas of the range, which indicates that selection and not genetic drift is responsible for the flower color variation. By investigating genetic variation at the loci underlying flower color variation I find a molecular signature of a selective sweep at one of the two flower color loci, further indicating that selection is responsible for this flower color variation. Finally, I measure selection on flower color in both sympatry and allopatry. I find no evidence that flower color variation is a response to ecological character displacement or local adaptation in the area of sympatry. I find evidence of pollinator preference for the ancestral allopatric flower color in allopatry, which may explain the persistence of the pattern of character displacement. These investigations of reproductive character displacement and reinforcement address important areas of research in evolutionary biology including the genetic basis of adaptation, the formation of species, and pleiotropy and conflicting selection pressures in species.