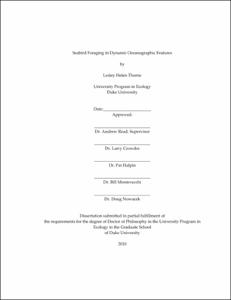 Oceanographic features, such as fronts, eddies, and upwellings, provide important foraging areas for marine predators. These areas serve as important "hotspots" of marine life, by aggregating weakly swimming lower and mid-trophic level species which, in turn, attract foraging predators. Despite the importance of these dynamic features, we lack a comprehensive understanding of how they create foraging habitat for seabirds and other marine predators. In the first part of this dissertation, I review current knowledge of how seabirds use oceanographic features with an emphasis on developing a more mechanistic understanding of these features, and identify important considerations for future studies. I use the findings of this review to inform two field research projects in the Bay of Fundy, Canada and Onslow Bay, North Carolina. In these two projects, I examined seabird abundance and distribution in relation to oceanographic features that occur at different spatial and temporal scales. In the first project, I examined foraging habitat of red-necked phalaropes (<italic>Phalaropus lobatus</italic>) in relation fine-scale tidal forcing near the Brier Island ledges in the Bay of Fundy. This research demonstrated the importance of biophysical interactions in creating phalarope habitat, and characterized red-necked phalarope habitat in both space and time. In Onslow Bay, I investigated the effects of Gulf Stream fronts and eddies on the abundance and distribution of seabirds using both remotely sensed and in situ data. I used fisheries acoustics surveys to investigate prey distribution within Gulf Stream frontal eddies. I then developed habitat models for the six most commonly sighted species or species groups (Cory's shearwaters, <italic>Calonectris diomedea</italic>; greater shearwaters (<italic>Puffinus gravis</italic>; Wilson's storm petrel, <italic>Oceanites oceanicus</italic>; Audubon's shearwaters, <italic>Puffinus lherminieri</italic>; black-capped petrels, <italic>Pterodrama hasitata</italic>; and red and red-necked phalaropes, grouped together as <italic>Phalaropus</italic> spp.) using multivariate modeling techniques. Gulf Stream frontal eddies influenced the abundance and distribution of seabirds in Onslow Bay, although frontal features were not as important in predicting seabird habitat as demonstrated in previous studies in the South Atlantic Bight. Prey availability in Gulf Stream frontal eddies was highest in eddy cold core regions, particularly in those regions close to the Gulf Stream. Taken together, the results of my dissertation: underscore the importance of conducting standardized surveys to assess dynamic environmental variables; demonstrate the use of multivariate methods to examine seabird foraging in relation to oceanographic features; emphasize the need to evaluate both prey distributions and physical regimes within oceanographic features at depth; and highlight the importance of temporal aspects of oceanographic features, such as the persistence and age of the features, when assessing the role that these features play in creating seabird foraging habitat.