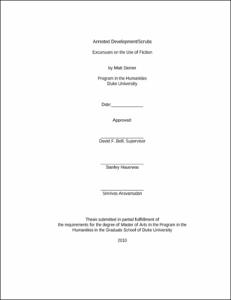 This thesis investigates two episodic television shows, <italics>Arrested Development</italics> and Scrubs, and attempts to establish why one succeeded with audiences and the other failed. Following the work of genre theory, it is asserted that the two shows resonate with opposing narratives framing lived experience. The former presents the institutional (or restrictive) force of language to guide one's thoughts, mark disassociations between the self and others, and determine action. The latter appeals to the creative (or liberating) use of dialogue and narrative to inspire agency. In privileging the concrete situations in which interactions with others enable growth without restricting the will, and in which others are engaged in the same self-investigation, Scrubs calls for an acknowledgement of others. Arrested Development points to the metaphysical language and power systems that make such acknowledgements impossible. It is argued thereafter that both world-pictures have their place. The opposition between Arrested Development and Scrubs develops into a dual affirmation of how ordinary uses of language have the potential to create arbitrary limits between the self and others, but also how ordinary language in a state of emergence from the particular lives of a multiplicity of speakers enables us to meaningfully communicate in the first place and antagonizes the metaphysical pictures that hold us captive. This thesis concludes by exploring the way that fiction, as a series of propositions, occupies the middle space between an epistemological opening up and closing off of the self to others, allowing it to be used for either purpose, or for both at once.