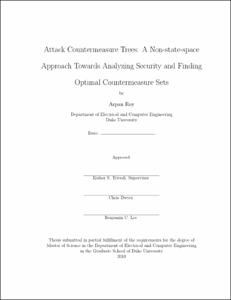 Attack tree (AT) is one of the widely used non-statespace

models in security analysis. The basic formalism of AT

does not take into account defense mechanisms. Defense trees

(DTs) have been developed to investigate the effect of defense

(ROI). DT, however, places defense mechanisms only at the

leaf nodes and the corresponding ROI/ROA analysis does not

incorporate the probabilities of attack. In attack response tree

(ART), attack and response are both captured but ART suffers

from the problem of state-space explosion, since solution of

ART is obtained by means of a state space model. In this

countermeasure tree (ACT) which avoids the generation and

well as countermeasures (in the form of detection and mitigation

events). In ACT, detection and mitigation are allowed not just at

time the state-space explosion problem is avoided in its analysis.

We use single and multiobjective optimization to find optimal

countermeasures under different constraints. We illustrate the