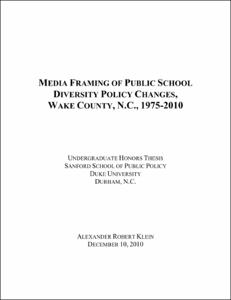 View / Download
1.7 Mb
Date
Author
Alex Klein
Repository Usage Stats
477
views
333
downloads
Abstract
American public education commands a workforce of millions of people, a budget in the trillions of dollars, and a significant share of one’s childhood. It is a vast, complex system run simultaneously by local, state, and federal government, each of which has different goals from the others. The media have an amazing number of topics to explore but limited time and space to do so. This giant educational system—one that affects anyone with a child, a teaching degree, a taxable home, a niece, a competing interest, an innovative idea—is not easily pushed in one direction. To the extent that the acquisition of knowledge changes an individual’s mind, and that change affects a group of citizens, and that group affects the status quo, the news media occupy an important slice of the educational system in America. Which educational issues the news media choose to cover, and with which “slant,” “angle,” or “frame,” can have an important influence on political decision-makers and the general public. This undergraduate thesis seeks to show how local coverage of public school diversity policies in Wake County, North Carolina, was framed during three times of great policy change. The (Raleigh, N.C.) News & Observer, a regional newspaper that primarily covers the city of Raleigh, Wake County, and state politics, is the news source of interest for this project. Three specific changes—all covered in detail by the News & Observer—are used to focus the study.Understanding how the news media couched their coverage of each of these three pivotal periods in the history of Wake County public schools has the potential to generate insights into both why decisions were made to change the system and how the news media might have played a role.
Type
Honors thesis
Department
Public Policy Studies
Subject
education
media framing
schools
diversity
wake county
Permalink
https://hdl.handle.net/10161/3178
Citation
Alex Klein (2010). Media Framing of Public School Diversity Policy Changes, Wake County, N.C., 1975-2010. Honors thesis, Duke University. Retrieved from https://hdl.handle.net/10161/3178.
Collections
More Info
Show full item record