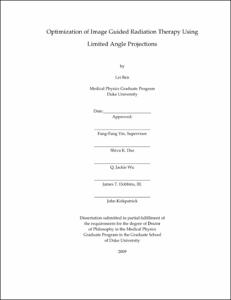 Digital tomosynthesis (DTS) is a quasi-three-dimensional (3D) imaging technique which reconstructs images from a limited angle of cone-beam projections with shorter acquisition time, lower imaging dose, and less mechanical constraint than full cone-beam CT (CBCT). However, DTS images reconstructed by the conventional filtered back projection method have low plane-to-plane resolution, and they do not provide full volumetric information for target localization due to the limited angle of the DTS acquisition.

A hybrid multiresolution rigid-body registration technique was developed to automatically register reference DTS images with on-board DTS images to guide patient positioning in radiation therapy. This hybrid registration technique uses a faster but less accurate static method to achieve an initial registration, followed by a slower but more accurate adaptive method to fine tune the registration. A multiresolution scheme is employed in the registration to further improve the registration accuracy, robustness and efficiency. Normalized mutual information is selected as the criterion for the similarity measure, and the downhill simplex method is used as the search engine. This technique was tested using image data both from an anthropomorphic chest phantom and from head-and-neck cancer patients. The effects of the scan angle and the region-of-interest size on the registration accuracy and robustness were investigated. The average capture ranges in single-axis simulations with a 44° scan angle and a large ROI covering the entire DTS volume were between -31 and +34 deg for rotations and between -89 and +78 mm for translations in the phantom study, and between -38 and +38 deg for rotations and between -58 and +65 mm for translations in the patient study.

Additionally, a novel limited-angle CBCT estimation method using a deformation field map was developed to optimally estimate volumetric information of organ deformation for soft tissue alignment in image guided radiation therapy. The deformation field map is solved by using prior information, a deformation model, and new projection data. Patients' previous CBCT data are used as the prior information, and the new patient volume to be estimated is considered as a deformation of the prior patient volume. The deformation field is solved by minimizing bending energy and maintaining new projection data fidelity using a nonlinear conjugate gradient method. The new patient CBCT volume is then obtained by deforming the prior patient CBCT volume according to the solution to the deformation field. The method was tested for different scan angles in 2D and 3D cases using simulated and real projections of a Shepp-Logan phantom, liver, prostate and head-and-neck patient data. Hardware acceleration and multiresolution scheme are used to accelerate the 3D estimation process. The accuracy of the estimation was evaluated by comparing organ volume, similarity and pixel value differences between limited-angle CBCT and full-rotation CBCT images. Results showed that the respiratory motion in the liver patient, rectum volume change in the prostate patient, and the weight loss and airway volume change in the head-and-neck patient were accurately estimated in the 60° CBCT images. This new estimation method is able to optimally estimate the volumetric information using 60-degree projection images. It is both technically and clinically feasible for image-guidance in radiation therapy.