Marriage and Divorce in the Herodian Family: A Case Study of Diversity in Late Second Temple Judaism 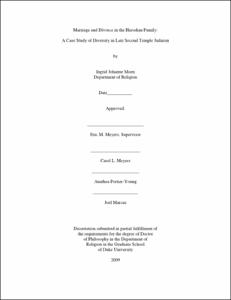 Noting the disparities between the stipulations of rabbinic law and the behavior of the Herodian royal family, scholars have traditionally described the family's commitment to Judaism as lackluster. In particular, many examples from the Herodians' marriage and divorce practices have been engaged to support this view. In contrast, I argue that the royal Jews' behavior in general and their marital practices in particular were largely in accord with one of the formulations of Jewish law in circulation in the first centuries B.C.E. and C.E. Indeed, the extant Second Temple writings indicate that Judaism in Roman Palestine was highly diverse. The rabbis, whose views became normative from late antiquity and on, may well have formed only one of the many competing schools of interpretation in Herodian times. Consequently, the family's failure to comply with rabbinic views does not preclude their identification as pious Jews committed to fulfilling the Law. In fact, one can make an argument for the Herodians' piety based on close readings of biblical texts, Josephus' descriptions of the royal family, and even certain readings of rabbinic texts. Other Jewish texts that pre- and postdate Herodian rule, as well as those from the late Second Temple era itself, further support this view. Indeed, situating the Herodians within their proper setting in Roman Palestine suggests that they were committed Jews who formed one subgroup of the many pious Jewish parties that comprised the diverse world of late Second Temple Judaism.