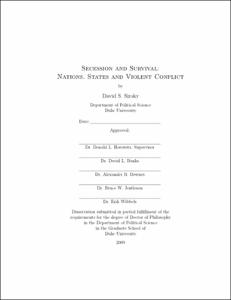 Secession is a watershed event not only for the new state that is created and the old state that is dissolved, but also for neighboring states, proximate ethno-political groups and major powers. This project examines the problem of violent secessionist conflict and addresses an important debate at the intersection of comparative and international politics about the conditions under which secession is a peaceful solution to ethnic conflict. It demonstrates that secession is rarely a solution to ethnic conflict, does not assure the protection of remaining minorities and produces new forms of violence. To explain why some secessions produce peace, while others generate violence, the project develops a theoretical model of the conditions that produce internally coherent, stable and peaceful post-secessionist states rather than recursive secession (i.e., secession from a new secessionist state) or interstate disputes between the rump and secessionist state. Theoretically, the analysis reveals a curvilinear relationship between ethno-territorial heterogeneity and conflict, explains disparate findings in the literature on ethnic conflict and conclusively links ethnic structure and violence. The project also contributes to the literature on secessionist violence, and civil war more generally, by linking intrastate and interstate causes, showing that what is frequently thought of as a domestic phenomenon is in fact mostly a phenomenon of international politics. Drawing upon original data, methodological advances at the interface of statistics, computer science and probability theory, and qualitative methods such as elite interviews and archival research, the project offers a comprehensive, comparative and contextual treatment of secession and violence.