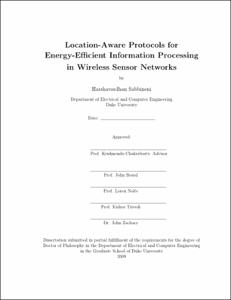 Advances in the miniaturization of microelectromechanical components have led to battery powered and inexpensive sensor nodes, which can be networked in an ad hoc manner to perform distributed sensing and information processing. While sensor networks can be deployed in inhospitable terrain to provide continuous monitoring and processing capabilities for a wide range of applications, sensor nodes are severely resource-constrained; they typically run on batteries and have a small amount of memory. Therefore, energy-efficient and lightweight protocols are necessary for distributed information processing in these networks.

The data provided by a sensor node is often useful only in the context of the location of the data source. Thus, sensor networks rely on localization schemes to provide location information to sensor nodes. The premise of this thesis is that location-aware protocols, which are based on the assumption that sensor nodes can estimate their location, improve the efficiency of data gathering and resource utilization of wireless sensor networks. Location-awareness improves the energy-efficiency of the protocols needed for routing, transport, data dissemination and self-organization of sensor networks. Existing sensor network protocols typically do not use location information effectively, hence they are not energy-efficient. In this thesis, we show how location information can be leveraged in novel ways in sensor network protocols to achieve energy efficiency. The contributions of this thesis are in four important areas related to network protocol design for wireless sensor networks: 1) self-organization; 2) data dissemination or node reprogramming; 3) service differentiation; and 4) data collection. Work on self-organization (SCARE) and data dissemination (LAF) was carried out from 2002 to 2004 and the work on service differentiation (SensiQoS) and data collection (HTDC) was carried out from 2004 to 2009.

This thesis next presents an energy-efficient protocol for data dissemination in sensor networks. Sensor networks also enable distributed collection and processing of sensed data. These networks are usually connected to the outside world with base stations or access points through which a user can retrieve the sensed data for further inference and action. Dissemination of information is a challenging problem in sensor networks because of resource constraints. Conventional methods use classical flooding for disseminating data in a sensor network. However, classical flooding suffers from disadvantages such as the broadcast storm problem. We have proposed an energy-efficient scheme that uses the concept of virtual grids to partition (self-configure) the set of nodes into groups of gateway nodes and internal nodes. While gateway nodes forward the packets across virtual grids, internal nodes forward the packets within a virtual grid. The proposed location-aided flooding protocol (LAF) reduces the number of redundant transmissions and receptions by storing a small amount of state information in a packet and inferring the information about nodes that already have the packet from the modified packet header. More recent approach, termed ALAF, has extended the virtual grid concept proposed by LAF to non-uniform sensor network deployments. In ALAF, non-uniform virtual grids are used to improve upon the energy savings provided by LAF and achieve higher energy savings for non-uniform sensor network topologies.

This thesis also addressees the challenging problem of timely data delivery in sensor networks. We propose SensiQos, which leverages the inherent properties of the data generated by events in a sensor network such as spatial and temporal correlation, and realizes energy savings through application-specific in-network aggregation of the data. This data delivery scheme is based on distributed packet scheduling, where nodes make localized decisions on when to schedule a packet for transmission to save energy and to which neighbor they should forward the packet to meet its end-to-end real-time deadline.

Finally, this thesis presents an energy-efficient data collection protocol for sensor networks. It is based on a combination of geographic hash table and mobile sinks that leverage mobile sinks to achieve energy-efficiency in event-driven sensor networks. Next, an analysis of the energy savings realized by the proposed protocol is presented. Simulation results demonstrate significant gains in energy savings for data collection with change in various parameter values.