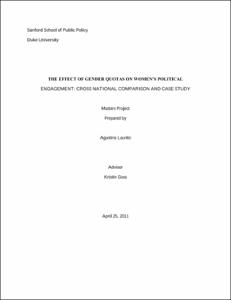 View / Download
804.6 Kb
Date
Author
Laurito, M. Agustina
Advisor
Goss, Kristin Anne
Repository Usage Stats
562
views
648
downloads
Abstract
In this paper I look at the effect of gender quotas on women’s political engagement. In particular I ask whether the enactment of a gender quota encourages women to become more involved in politics by sending the signal that politics is not an activity reserved for men. The main source of data for the outcome variables is the World Values Survey (WVS) five wave dataset (1981-2008) that includes surveys conducted in 87 countries, the total number of respondents is 257,597. The first wave of the WVS was carried out in 1981, a second wave of the WVS took place in 1990, the third wave took place in 1995, the fourth wave took place in 1999-2000, and the last wave was carried out in 2005-2007. The final sample is reduced. I selected the countries that provided information of at least one point in the past before the enactment of the quota and one point after the enactment of the quota. The treatment group is composed of all those countries that established a quota at some point during the survey and the control group is composed of those countries that never established a gender quota. The resulting groups include 21 countries that have a quota with 88,749 respondents, and 23 countries without a quota and 76,587 respondents in this group. Countries that score a 3 on Freedom House’s Freedom in the World Index were also dropped from the dataset. Data on the independent variable existence of a gender quota was obtained from the Quota Project as well as secondary sources. Research Design In the first part of the analysis I compare differences in women’s political engagement for countries with a quota and for countries without a quota on five outcomes: discuss politics with friends, taken political action, signed a petition, participated in a demonstration and membership in a political party. In this section I assume that quotas would not have an effect on men and I use them as the control group. In the second part of the study, I try to estimate the effect of quotas on women’s political engagement using regression analysis. The model includes country and time fixed effects and an interaction term (quota*female) to capture the effects of quotas on women’s political engagement. This model also includes clustered standard errors at the country level. Because gender quotas can be established by political parties or legislatures I include one specification that controls for whether a quota is legislated or not. As two further specifications I use a fixed effects model to estimate the effects of quotas only for women and for men. In the second section of the paper I conduct a case study focused on Argentina to try to illuminate the different mechanisms that can explain women’s increased levels of political engagement and the potential effects of gender quotas. In particular, I focus on three mechanisms: greater visibility of women politicians, importance of political and economic crises and ripple effects of gender quotas that can explain increased levels of political engagement for women. The analysis in this paper does provide conclusive results about the effect of gender quotas on women’s political engagement. Given the limitations of this study in terms of data and potential omitted factors in the analysis, the symbolic impact of quotas needs to be further explored. The case study points out that the enactment of a gender quota contributes to the visibility of women politicians; it is possible then that quotas have an indirect effect on women’s political engagement. Quotas also can start a debate about the role of women in politics and in other institutions that can also contribute to women’s mobilization and interest in politics. However, there are many other potential factors that can influence women’s political engagement after the enactment of a quota and that are not being taken into account in this study. If quotas were also debated along with other policies that benefit women this could explain increased levels of women’s political engagement. Further studies of this phenomenon need to take into account these contextual factors, as well as others related to the potential effect of political institutions such as the electoral system on the effect of quotas. Finally, as part of the policy feedbacks literature, this paper concludes with the idea that there should be further studies that explore the mechanisms that lead some laws and policies to have feedback effects.
Type
Master's project
Department
The Sanford School of Public Policy
Subject
gender quotas, political behavior, women, policy feedbacks
Permalink
https://hdl.handle.net/10161/3620
Citation
Laurito, M. Agustina (2011). The Effect of Gender Quotas on Women's Political Engagement: Cross-National Comparison and Case Study. Master's project, Duke University. Retrieved from https://hdl.handle.net/10161/3620.
Collections
More Info
Show full item record