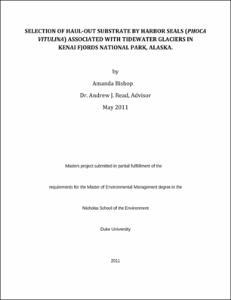 View / Download
3.4 Mb
Date
Author
Bishop, Amanda
Advisor
Read, Andrew
Repository Usage Stats
369
views
531
downloads
Abstract
In Alaska, 10-15% of harbor seals use glacial ice as a haulout substrate on which to rest, molt, and care for young. Some glaciers in Kenai Fjords National Park are receding at a staggering rate which could reduce the habitat available to seals in the near future. Understanding the current usage of haulout substrate at both a local and region scale will be vital to effective and proactive management of the species in light of climate change predictions. The primary goal of the present study was to evaluate the seasonal characteristics of ice availability and the associated patterns of usage by harbor seals in Northwestern Fjord—which terminates in a rapidly receding glacier. Patterns of seal attendance and ice conditions were evaluated across six sub-regions and across two summers. Data from Northwestern Fjord was also contrasted with observations conducted in a location, Aialik Bay, where the primary glacier is relatively stable. Results of this analysis indicate seasonal patterns of ice availability and linkages between seasonal ice conditions and the numbers of seals present. Overall ice coverages did not have predictable seasonal trends but small and medium sized ice platforms had significant trends in their availability throughout the summer. In Northwestern Fjord attendance peaked in midsummer and was positively correlated with ice availability and the availability of large sized bergs. Seal attendance also exhibited seasonal trends in Aialik Bay but opposite those observed in Northwestern Fjord. This study provided a baseline understanding of habitat availability and usage for the study area. Further research examining the patterns of habitat use by sex, age class and the movement between fjords is needed to fully understand the dynamics of how harbor seals in Kenai Fjords National Park utilize habitat.
Type
Master's project
Department
Nicholas School of the Environment and Earth Sciences
Subject
harbor seals
Alaska
glacial ice
wildlife management
Permalink
https://hdl.handle.net/10161/3628
Citation
Bishop, Amanda (2011). SELECTION OF HAUL-OUT SUBSTRATE BY HARBOR SEALS (PHOCA VITULINA) ASSOCIATED WITH TIDEWATER GLACIERS IN KENAI FJORDS NATIONAL PARK, ALASKA. Master's project, Duke University. Retrieved from https://hdl.handle.net/10161/3628.
Collections
More Info
Show full item record