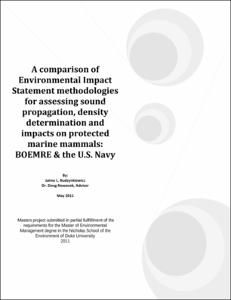 View / Download
2.7 Mb
Date
Author
Budzynkiewicz, Jaime
Advisor
Nowacek, Doug
Repository Usage Stats
569
views
1,155
downloads
Abstract
Sound in the world oceans is an increasingly important conservation issue as human impact throughout the oceans continues to grow without signs of abatement. Deep-water background noise is reported to be doubling every decade. In the U.S. two major sources of underwater sound are the seismic industry (regulated by the Bureau of Ocean Energy Management, Regulation and Enforcement (BOEMRE)) and Naval sonar. Both of these agencies are required to follow national environmental protocols, such as the National Environmental Policy Act, (NEPA) in regard to their impacts on the environment. These two sound sources produced (or regulated) by two different agencies generate similar impacts to the marine environment, in particular protected marine mammals that rely on sound for survival. The assessment techniques used, and the transparency of the agencies involved is highly in question for actions that produce similar impacts. This master’s project analyzes the assessment techniques of BOEMRE and the U.S. Navy concerning underwater sound, exposing the inadequacies and successes of each agency. The analysis was conducted by reading and comparing the techniques used in Environmental Assessments (EA) and Environmental Impact Statements (EIS) produced by both agencies from 2004 to the present. A series of recommendations for both agencies was produced to address the need for more streamlined and transparent analyses that will aid in more accurate and dynamic impact determinations for such projects as the upcoming BOEMRE Programmatic EIS in the Atlantic Planning Region. I have also developed a GIS-based tool that aids in spatial analysis of propagating sound within the marine environment to improve analysis of potential impacts. This tool allows acoustic propagation models run in the computational program MATLAB® to be imported and integrated in the GIS program ArcGIS ® through the Python scripting language. The integration of this propagation data into GIS allows for better visualizations of sound propagation in 360° around the source and from an aerial perspective. It also allows for further geospatial analysis with other geospatial data such as habitat suitability and species distribution, which can allow for more adaptive species impact determinations and adaptive management for both sonar and seismic survey situations.
Type
Master's project
Department
Nicholas School of the Environment and Earth Sciences
Subject
marine acoustic propagation
sonar impacts
seismic industry impacts
NEPA
geospatial analysis tool
marine mammals
Permalink
https://hdl.handle.net/10161/3639
Citation
Budzynkiewicz, Jaime (2011). A comparison of Environmental Impact Statement methodologies for assessing sound propagation, density determination and impacts on protected marine mammals: BOEMRE & the U.S. Navy. Master's project, Duke University. Retrieved from https://hdl.handle.net/10161/3639.
Collections
More Info
Show full item record