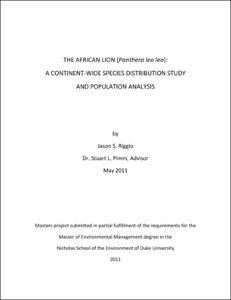 Files
Masters Project
7.8 Mb
Signed Abstract
1.2 Mb
Date
Author
Riggio, Jason
Advisor
Pimm, Stuart
Repository Usage Stats
1,564
views
47,617
downloads
Abstract
Human population growth and land conversion across Africa makes the future of wide-ranging carnivores uncertain. For example, the African lion (Panthera leo leo) once ranged across the entire continent – with the exception of the Sahara Desert and rainforests. It now lives in less than a quarter of its historic range. Recent research estimates a loss of nearly half of the lions in the past two decades. Some sources put their numbers as low as 20,000 individuals. Given these declines, conservation organizations propose to list the African lion as “endangered” under the U.S. Endangered Species Act and to upgrade the species’ CITES protections from Appendix II to Appendix I. To establish the lion’s current conservation status, I analyzed the size, distribution, and potential connections of populations across its range in Africa. It is particularly important to identify connected sub-populations and areas that can serve as corridors between existing protected areas. I compile the most current scientific literature, comparing sources to identify a current population estimate. I also use these sources to map known lion populations, potential habitat patches, and the connections between them. Finally, I assess the long-term viability of each lion population and determine which qualify as “lion strongholds.” The lion population assessment in this study has shown that over 30,000 lions remain in approximately 3,000,000 km2 of Africa. Lions are distributed across a total of 78 habitat patches in 27 countries. Since 2002, five countries have lost their lion populations. However, more than half of the remaining lions in Africa reside in 11 viable populations contained within protected areas that have stable or increasing lion population trends (lion strongholds). Therefore lions are not currently threatened with extinction and it is unlikely that the total population of free-ranging lions in Africa will drop below 20,000 individuals. Given these findings, it is clear that new data based on field surveys are necessary to appropriately evaluate the legal status of the African lion.
Type
Master's project
Department
Nicholas School of the Environment and Earth Sciences
Subject
conservation, species distribution, lion, population analysis
Permalink
https://hdl.handle.net/10161/3714
Citation
Riggio, Jason (2011). The African Lion (Panthera leo leo): A Continent-Wide Species Distribution Study and Population Analysis. Master's project, Duke University. Retrieved from https://hdl.handle.net/10161/3714.
Collections
More Info
Show full item record