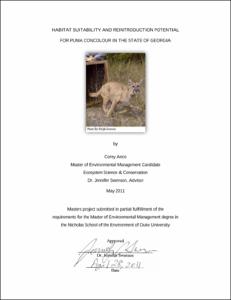 View / Download
4.8 Mb
Date
Author
Anco, Corey
Advisor
Swenson, Jennifer Jane
Repository Usage Stats
521
views
1,785
downloads
Abstract
The identification of suitable habitat sites for potential reintroduction or natural recolonization is an important step in the recovery of an endangered species. Since the early 20th century, there has not been evidence of a breeding population of cougars (Puma concolour) east of the Mississippi River, except an isolated population in southern Florida. During the latter half of the 20th and 21st centuries, cougar presence (photographs, tracks, scat, etc.) has been documented in historic ranges where cougars were thought to be extirpated east of the Mississippi River. Currently, one subspecies of cougar, the Florida cougar (P. c. coryi), is listed as an endangered species and the Florida Panther Recovery Plan has been created to aid conservation efforts. Criteria for delisting the subspecies require the establishment of three viable, self-sustaining breeding populations of at least 240 adult and subadult cougars. There is a pressing need to conserve critical habitat and identify potential reintroduction sites in the face of increasing anthropogenic encroachment. The purpose of this master’s project was to identify suitable sites to reintroduce the cougar in the state of Georgia. I used environmental variables to identify primary cougar habitat zones across the state. As a reintroduced species, cougars would require habitat of considerable size to ensure long-term survival (>100 years) and genetic health of a source population. For reintroduction, a population of 240 cougars requires about 13,000 km2 of habitat (2-3 cougars per 100 km2). My analyses revealed 14 primary habitat zones, grouped geographically into five habitat regions. Two of these regions, one in northeastern and one in southern Georgia (Chattahoochee N.F. and Okefenokee N.W.R. respectively), have networks of connected habitat capable of supporting significant breeding populations of cougars. I identified three additional habitat regions capable of supporting breeding populations of smaller sizes and/or dispersing cougars. Previously estimated deer densities per management unit as well as the wide distribution of feral swine indicate the availability of an ample prey base. Based on the availability of habitat and prey, combined with the relative lack of development surrounding candidate sites, the USFWS could designate these areas as critical habitat and reintroduce the Florida cougar in the state of Georgia.
Type
Master's project
Department
Nicholas School of the Environment and Earth Sciences
Permalink
https://hdl.handle.net/10161/3719
Citation
Anco, Corey (2011). HABITAT SUITABILITY AND REINTRODUCTION POTENTIAL FOR PUMA CONCOLOUR IN THE STATE OF GEORGIA. Master's project, Duke University. Retrieved from https://hdl.handle.net/10161/3719.
Collections
More Info
Show full item record