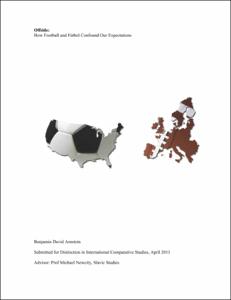 View / Download
1.8 Mb
Date
Author
Arnstein, Benjamin
Repository Usage Stats
469
views
6,641
downloads
Abstract
For nearly a century football has been emblematic of the United States and its society. This will be compared against soccer, which is far and away the most popular and important sport in Europe. The United States economy is theoretically a free-market system. In contrast, Europe’s economic system is rooted in regulated and interventionist principles. Interestingly, the economic policies of soccer and football as industries do not follow the economic philosophies predominant in their respective home regions; in many ways they actually operate directly to the contrary. In both soccer and football the inflow and outflow of capital are derived primarily from the same three sources: media and televisions rights, merchandising and sponsorship rights, and player salaries. Examining these areas shows the ways in which the economic structures confound societal expectations. The four primary reasons behind this paradox are: the different structures of the governing bodies, the different ownership structures of the teams/clubs, the different levels of competition between teams in each region, and the difference in length of outlook for economic decision making by those in charge of the two sports. The current consequences are superteams causing unbalanced competition in European soccer and a potential work stoppage in the NFL.
Type
Honors thesis
Department
International Comparative Studies
Subject
Soccer
Football
Economic
Europe
United States
Permalink
https://hdl.handle.net/10161/3730
Citation
Arnstein, Benjamin (2011). Offside. Honors thesis, Duke University. Retrieved from https://hdl.handle.net/10161/3730.
Collections
More Info
Show full item record