The Hidden Epidemic: Violence against Women in Haiti 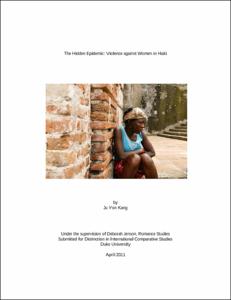 View / Download
688.3 Kb
Date
Author
Kang, Ju Yon
Repository Usage Stats
1,588
views
14,213
downloads
Abstract
Since the January 2010 earthquake in Haiti, violence against women has frequently appeared in the media as one of the gravest consequences due to insecure living situations in settlement camps. This, however, is not newly arisen issue and has been occurring in the country at relatively high rates prior to the disaster. Violence against women presents an unconventional portrait in Haiti, meaning the characteristics of the situation run counter to the usual circumstance of violence in which the poorest and least educated form the majority of victims. This stems from Haiti’s climate of insecurity, which is composed of economic, social and political instabilities and imposes extremely challenging living conditions on its population. The climate of insecurity produces two social mechanisms—the crisis of masculinity and the feminization of insecurity—that make women vulnerable to violence, especially sexual assault. Gender-based violence in turn leads to traumatic consequences that perpetuate the climate of insecurity by engendering an environment of fear on the part of the victim. Thus, the violence against women and the climate of insecurity in Haiti are in a cyclical relationship in which one drives the other.
Description
Honors thesis for International Comparative Studies
Type
Honors thesis
Department
International Comparative Studies
Subject
Haiti
violence against women
insecurity
masculinity
trauma
women’s rights
Permalink
https://hdl.handle.net/10161/3738
Citation
Kang, Ju Yon (2011). The Hidden Epidemic: Violence against Women in Haiti. Honors thesis, Duke University. Retrieved from https://hdl.handle.net/10161/3738.
Collections
More Info
Show full item record