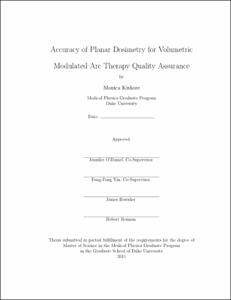 With the advent of new, more efficient, rotational therapy techniques such as volumetric modulated arc therapy (VMAT), radiation therapy treatment precision requires evolving quality assurance. Two dimensional (2D) detector arrays have shown angular dependence that must be compensated for by the creation of angular correction factor tables. Currently available correction factor tables have several underlying assumptions that leave room for improvement: first, these correction factors assume that the response of all ion chambers is identical for each angle; second, that the ion chamber array response from gantry angles 0&deg-180&deg are equivalent to the response from 180&deg-360&deg; and, third, that the response is independent of the direction of rotation.

Measurements were acquired using a 2D ion chamber array (MatriXX&reg, IBA Dosimetry) for static open fields delivered every 5&deg around the MatriXX while dose was calculated using Eclipse v8.6 (analytic anisotropic algorithm, Varian Medical Systems). Customized correction factors were created by dividing the calculated dose by the measured dose for each ion chamber. Two measurement positions were used in the creation of the custom correction factors: a coronal position in which the couch was included, and two sagittal orientations in which the couch was not included.

The correction factors were verified using open field arcs and VMAT patient plans, where measured doses were compared to calculated doses using gamma analysis (3%, 3 mm). Narrow fields were also delivered clockwise and counterclockwise in order to investigate the effect of the internal structure of the ion chamber array.

The angular response of the individual ion chambers appears to vary significantly (1 &sigma &le 4.6%). The response from 0&deg-180&deg vs. 180&deg-360&deg is significantly different (paired t-test yields p<0.0001). Custom correction factors do enhance the agreement between measured and calculated doses for open field arcs and VMAT patient plans compared to the default correction factors. The direction of rotation appears to affect the dose to the penumbra region of narrow fields, which could affect VMAT patient specific quality assurance.

The custom correction factor tables, using measurements for individual ion chambers over a full 0&deg-360&deg range, allows for improved accuracy in measurements by the 2D ion chamber array. However, even the corrected measurements still showed discrepancies with the calculated doses for VMAT plans.