Optimization of RapidArc for Head-and-Neck Radiotherapy 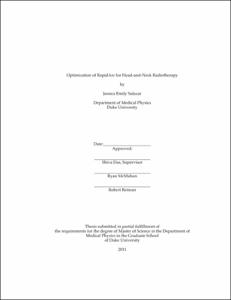 <bold>Purpose:</bold> The goal of this planning study is to determine which sectors of the gantry rotation are most and least important in the treatment of head-and-neck carcinomas with Intensity Modulated Arc Therapy, and then use this knowledge to optimize the arc arrangement by adding arcs to reinforce the sectors that are most significant. <bold>Materials and Methods:</bold> Ten patients with head-and-neck cancer involving bilateral lymph nodes were selected for this planning study. Baseline RapidArc plans comprising two full gantry rotation arcs (RA2) were generated. Avoidance sectors and partial gantry rotations were used to produce RapidArc plans with various sectors removed: posterior (RApost-), anterior (RAant-), or lateral sections (RAlat-). Based on the results of these two-arc plans, two different resulting three-arc plans were created, with the third arc used to reinforce the important sectors. <bold>Results:</bold>The posterior sector was the least important contributor to overall plan quality. Removal of the lateral sector increased the dose to all critical structures with a resultant decrease in the median dose to the parotids. Removal of the anterior portion increased the dose to the larynx and parotids. The first three-arc plan produced from these results removed the posterior and lateral section and reinforced the anterior sectors (RA3ant+). The second three-arc plan removed the posterior and one lateral sector, while reinforcing the anterior sector (RA3ant+lat+). Both three arc plans provided better sparing to the parotids and spinal cord over RA2. Doses to the oral cavity, larynx, and brainstem were larger than RA2. RapidArc always produced plans with lower MUs than the corresponding IMRT plans while integral dose was lower for IMRT. <bold>Conclusions:</bold> For the class of tumors investigated in this report, RA3ant+lat+ produced the most optimal plan in terms of target coverage and critical structure sparing while also being the simplest to develop treatment plans for.