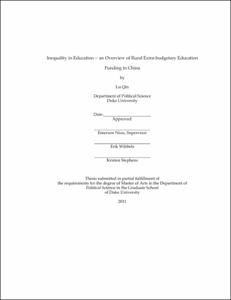 The purpose of this research was to analyze education inequality in rural China as reflected in government funding policy on education. Specifically, the research looks whether extra-budgetary income is a dis-equalizing factor in provincial level education spending or rather equalizes in education spending. Via analysis of existing data on education financing in more recent year, it was shown that the inequality of spending in total education expenditure per capita is greater than budgetary expenditure from government sources in the year 2006 and 2008 for elementary schools, and 2002 and 2006 for middle schools. More specific regression analysis has shown that extra-education levies exaggerate financial inequality between provinces. Gini coefficient calculations of education income per capita are slightly different from the expenditure calculations. Furthermore, regional comparison has shown that richer provinces would actually rely more of the share of their education revenue on extra-budgetary sources. This would suggests that extra-budgetary income is not used to compensate for the lack of budgetary funding and expectantly equalize education resources between regions, as assumed by the central government in China, rather, it actually sometimes widens the gap in financing education in rural China.