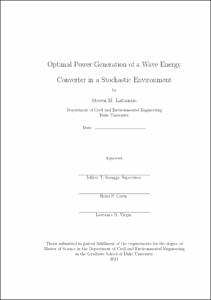 In applications of ocean wave energy conversion, it is well known that feedback control can be used to achieve favorable performance. Current techniques include methods such as tuning a device to harvest energy at a narrow band of frequencies, which leads to suboptimal performance, or methods that are anticausal and require the future wave excitation to be known. This thesis demonstrates how to determine the maximum-attainable power generation and corresponding controller for a buoy type wave energy converter with multiple generators in a stochastic sea environment using a causal dynamic controller. This is accomplished by solving a nonstandard H2 optimal control problem. The performance of the causal controller is compared to the noncausal controller for various cases. This work provides a significant improvement over current control techniques because it involves a causal controller that can absorb a large amount of power over a broader bandwidth than other control techniques, including absorbing power across multiple modes of resonance. The importance of an adaptive control algorithm is also demonstrated.