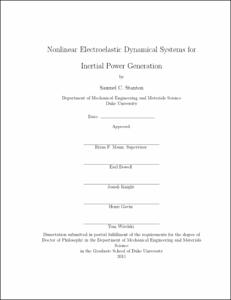 Within the past decade, advances in small-scale electronics have reduced power consumption requirements such that mechanisms for harnessing ambient kinetic energy for self-sustenance are a viable technology. Such devices, known as energy harvesters, may enable self-sustaining wireless sensor networks for applications ranging from Tsunami warning detection to environmental monitoring to cost-effective structural health diagnostics in bridges and buildings. In particular, flexible electroelastic materials such as lead-zirconate-titanate (PZT) are sought after in designing such devices due to their superior efficiency in transforming mechanical energy into the electrical domain in comparison to induction methods. To date, however, material and dynamic nonlinearities within the most popular type of energy harvester, an electroelastically laminated cantilever beam, has received minimal attention in the literature despite being readily observed in laboratory experiments.

In the first part of this dissertation, an experimentally validated first-principles based modeling framework for quantitatively characterizing the intrinsic nonlinearities and moderately large amplitude response of a cantilevered electroelastic generator is developed. Nonlinear parameter identification is facilitated by an analytic solution for the generator's dynamic response alongside experimental data. The model is shown to accurately describe amplitude dependent frequency responses in both the mechanical and electrical domains and implications concerning the conventional approach to resonant generator design are discussed. Higher order elasticity and nonlinear damping are found to be critical for correctly modeling the harvester response while inclusion of a proof mass is shown to invigorate nonlinearities a much lower driving amplitudes in comparison to electroelastic harvesters without a tuning mass.

The second part of the dissertation concerns dynamical systems design to purposefully engage nonlinear phenomena in the mechanical domain. In particular, two devices, one exploiting hysteretic nonlinearities and the second featuring homoclinic bifurcation are investigated. Both devices exploit nonlinear magnet interactions with piezoelectric cantilever beams and a first principles modeling approach is applied throughout. The first device is designed such that both softening and hardening nonlinear resonance curves produces a broader response in comparison to the linear equivalent oscillator. The second device makes use of a supercritical pitchfork bifurcation wrought by nonlinear magnetic repelling forces to achieve a bistable electroelastic dynamical system. This system is also analytically modeled, numerically simulated, and experimentally realized to demonstrate enhanced capabilities and new challenges. In addition, a bifurcation parameter within the design is examined as a either a fixed or adaptable tuning mechanism for enhanced sensitivity to ambient excitation. Analytical methodologies to include the method of Harmonic Balance and Melnikov Theory are shown to provide superior insight into the complex dynamics of the bistable system in response to deterministic and stochastic excitation.