Jacob Struggling With the Angel: Siegfried Lipiner, Gustav Mahler, and the Search For Aesthetic-Religious Redemption in Fin-de-siècle Vienna 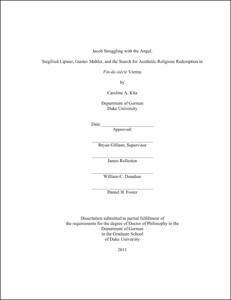 This dissertation explores the meaning of art and religion in fin-de-siècle Vienna through the symphonies of the composer Gustav Mahler (1860-1911) and the philosophical and dramatic works of the poet Siegfried Lipiner (1856-1911). Using as a framework aesthetic discourses concerning the ability of music to be "read" as a narrative text, this study highlights the significant role of both poet and composer in the cultural and intellectual world of Vienna at the end of the nineteenth century. In this study, I compare and contrast Lipiner's vision of religious renewal with the redemptive narratives in the programs of Mahler's first four symphonies, which were composed during a period when the poet and composer shared a close friendship and intellectual exchange. Furthermore, I also discuss Mahler and Lipiner's works in relation to the writings of the Polish Romantic poet, Adam Mickiewicz (1798-1835), the philosopher Friedrich Nietzsche (1844-1900), and the composer and cultural critic, Richard Wagner (1813-1883), demonstrating how the images of the heroic martyr, the Übermensch and the Volk, play a role in the re-conception of man's relationship to the divine, which is central to Mahler and Lipiner's idea of redemption. However, I also claim that the political and cultural climate of Vienna around 1900 played an important role in their interpretation of these ideas. Despite their public conversion and cultural assimilation, Mahler and Lipiner's Jewish heritage distinctly shaped their interest in artistic-religious redemption both to cope with their own personal feelings of alienation in the society in which they lived, and as a cure for the existential malaise of their time. This study demonstrates not only the significant impact of Lipiner's aesthetic-religious philosophy on Mahler's music, but also portrays their vision of redemption as an re-envisioning of man's relationship to God, which stands in contrast to the modern trend of secularism, and reflects a little-explored dimension of aesthetic and religious culture in fin-de-siècle Vienna.