Sources and Biogeochemical Transformation of Mercury in Aquatic Ecosystems 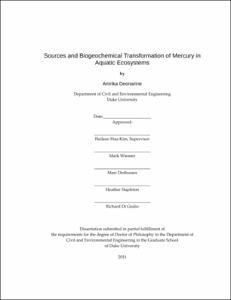 Mercury contamination in aquatic ecosystems is a concern as anaerobic aquatic sediments are the primary regions of methylmercury production in freshwater and coastal regions. Methlymercury is a bioaccumulative neurotoxin, and human exposure to methylmercury can result in impaired functioning of the central nervous system and developmental disabilities in children. To minimize the risk of human exposure to methylmercury, it is important to be knowledgeable of the various sources which can supply mercury to aquatic ecosystems as well as have a complete understanding of the biogeochemical processes which are involved in methylmercury production in aquatic systems. In this dissertation work, both mercury biogeochemical speciation in anaerobic aquatic sediments and sources of mercury to aquatic systems were addressed.

The biogeochemical speciation of mercury is a critical factor which influences the fate and transformation of mercury in aquatic environments. In anaerobic sediments, mercury chemical speciation is controlled by reduced sulfur groups, such as inorganic sulfide and reduced sulfur moieties in dissolved organic matter (DOM). The formation of mercury sulfide nanoparticles through stabilization by dissolved organic matter (DOM) was investigated in precipitation studies using dynamic light scattering. Mercury sulfide nanoparticles (particle diameter < 100 nm) were stabilized through precipitation reactions that were kinetically hindered by DOM. To further investigate the interaction between DOM and metal sulfides, similar precipitation studies were performed using zinc sulfide and a number of DOM isolates (humic and fulvic acids) representing a range of DOM properties. The results of these experiments suggest that the mechanism of metal sulfide particle stabilization may be electrostatic or electrosteric, depending on the nature of the DOM molecule.

The mercury that is methylated in aquatic systems enters these environments via a number of sources, including atmospheric deposition, landscape runoff and other industrial and municipal activities. In two separate field studies, two potential sources of mercury to aquatic systems were investigated: landscape runoff and coal combustion products. The mercury loading to aquatic environments from these sources and their potential for transformation to methylmercury were investigated.

The environmental impact of coal combustion products (CCPs) with respect to mercury and methylmercury was also investigated in a river system (Roane County, TN) that was inundated with fly ash and bottom ash from the Tennessee Valley Authority Kingston coal ash spill in 2008. Elevated total mercury and methylmercury sediment concentrations (relative to upstream sediments) were detected in regions impacted by the ash spill, and our biogeochemical data suggested that the ash may have stimulated methylmercury production in river sediments.

The results of this dissertation work address the formation of mercury sulfide (along with zinc sulfide) nanoparticles in anaerobic aquatic sediments. In the current mercury methylation paradigm, dissolved mercury species such as Hg(SH)02(aq) and HgS0(aq) are assumed to be the only mercury species that are available for methylation. The results of this dissertation work suggests that in previous studies, HgS0(aq) may have been mistaken as mercury sulfide nanoparticles which may be formed in under supersaturated conditions (with respect to HgS(s)) where DOM is present. Mercury sulfide nanoparticles are a mercury biogeochemical species that has been largely ignored in the research literature and whose role in the mercury biogeochemical cycle and in mercury methylation remains to be investigated.

This dissertation work also identifies potential sources of mercury to aquatic systems, namely, landscape runoff and CCPs. Atmospheric deposition is currently considered to be the major source of mercury to inland aquatic water bodies compared to sources such as landscape runoff and CCPs. However, in the watershed studied in this dissertation, landscape runoff was identified as a larger source of mercury than atmospheric deposition, suggesting that these so-called `minor' sources may actually be major sources of mercury to watersheds depending on land usage, and should be considered in watershed models. Furthermore, the environmental hazards of mercury-associated with CCPs has typically been determined through leaching experiments, such as the Toxicity Characteristic Leaching Procedure (TCLP), which are not representative of environmental conditions and do not predict that CCPs may influence mercury methylation in aquatic sediments. Thus, in this dissertation work, we suggest that leaching protocols such as the TCLP should be re-evaluated.

Overall, this dissertation work will be useful in future studies examining mercury speciation and bioavailability to methylating bacteria in aquatic sediments, and the formation of metal sulfide nanoparticles in aquatic systems. Additionally, data on sources of mercury will be useful in developing policies for the regulation of these sources and in assessing the risk to human health from mercury methylation.