Sympathy for the Devil: Volatile Masculinities in Recent German and American Literatures 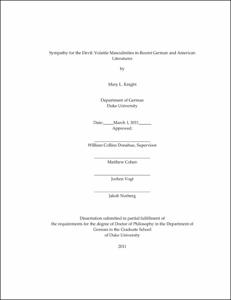 This study investigates how an ambivalence surrounding men and masculinity has been expressed and exploited in Pop literature since the late 1980s, focusing on works by German-speaking authors Christian Kracht and Benjamin Lebert and American author Bret Easton Ellis. I compare works from the United States with German and Swiss novels in order to reveal the scope - as well as the national particularities - of these troubled gender identities and what it means in the context of recent debates about a "crisis" in masculinity in Western societies. My comparative work will also highlight the ways in which these particular literatures and cultures intersect, invade, and influence each other.

In this examination, I demonstrate the complexity and success of the critical projects subsumed in the works of three authors too often underestimated by intellectual communities. At the same time, I reveal the very structure and language of these critical projects as a safe haven for "male fantasies" of gender difference and identity formation long relegated to the distant past, fantasies that continue to lurk within our cultural currencies.