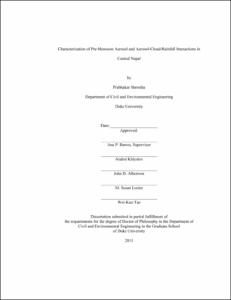 This dissertation presents the first findings of aerosol indirect effect in the foothills of the Himalayas (Central Nepal), through a systematic research approach involving satellite data analysis, field campaign, growth factor estimation and numerical modeling studies. Satellite retrieved aerosol optical depth data over the region were first used to identify the dominant modes of spatial/temporal variability of aerosols in the region. Based on the observed dominant spatial mode of aerosol in the pre-monsoon season (Shrestha and Barros 2010, ACP), a field campaign was organized under the Joint Aerosol Monsoon Experiment (JAMEX09) at Dhulikhel and Besisahar to simultaneously measure dry and ambient aerosols size spectra using SMPS and chemical composition using filters (Shrestha et al. 2010, ACP). The diurnal cycle of aerosol number concentration exhibited a consistent peak in the morning and evening period, which was found to be associated with increase in local emission and the delay in ventilation of aerosol through upslope flows and mixing (inferred from an idealized numerical study over Besisahar). The aerosol size distribution was mostly unimodal at night and bimodal during the day, with a consistent larger mode around 100nm and a smaller mode located around 20nm. The chemical composition of PM2.5 was dominated by organic matter at both sites. Organic carbon (OC) comprised the major fraction (64~68%) of the aerosol concentration followed by ionic species (24~26%, mainly and ). Elemental Carbon (EC) compromised 7~10% of the total composition and 27% of OC was found to be water soluble at both sites. The aerosol number concentration increased and decreased in the presence of synoptic scale aerosol plumes and after rainfall events respectively.

A simple model based on Köhler theory was used to explain the observed growth factor using an assumption of (NH4)2SO4 aqueous solution including the presence of slightly soluble organic compounds (SSC) with an insoluble core as a function of molality and mass-fraction. The measured growth factors suggest that the aerosols are in metastable state due to the strong diurnal cycle of relative humidity (RH). The bulk hygroscopic parameter estimated from the DGF and chemical composition of aerosols suggests less hygroscopic aerosols at both locations as compared to previous studies. The dry aerosol size distribution and the bulk hygroscopic parameters were used to estimate the cloud condensation nuclei (CCN) spectrum, which was vertically scaled up to lifting condensation level (LCL) assuming that the shape and chemical properties of aerosol remains unchanged (Shrestha et al. 2011, submitted to JGR). Finally, these regional CCN spectra for polluted and clean conditions as well as standard continental and marine spectra used in numerical weather prediction models (Cohard et al. 1998) were used to probe CCN sensitivity for a pre-monsoon storm system in Central Nepal during JAMEX09. A significant shift in the maxima of the accumulated precipitation was observed between the continental aerosol spectra (Cohard et al. 1998) and the polluted spectra for Dhulikhel. This shift caused the displacement of rainfall maximum away from the Kulekhani water reserve catchment, which is key to hydropower in Nepal. Detailed analysis of the simulations suggests that simgnificant differences in the space-time variability and intensity of precipitation, if not areally integrated amounts, can be explained by differences in the timing and intensity of latent heat release and absorption due to freezing/melting of hydrometers and evaporative cooling of droplets, strengthening cold pool formation and associated circulations. This numerical study provides the first look on the aerosol indirect effect over Nepal for a single pre-monsoon rainfall event, and how aerosols can potentially affect the precipitation distribution (to be submitted to JGR). In addition, it shows the importance of using regionally consistent CCN spectra in model parameterizations of aerosol-cloud interactions. At local places, the differences in simulated precipitation between marine, JAMEX09 clean and polluted air spectra were smaller (up tp ± 50%) than the difference between those simulations and the standard continental aerosol spectra (±200%).