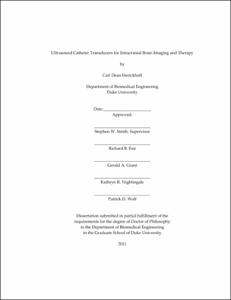 Each year, over 13,000 people in the United States die from a primary malignant brain tumor. Currently, primary BTs are treated most commonly by surgery, radiotherapy, and systemic chemotherapy, though each of these methods carries a risk of complications or acute side effects.

Ultrasound hyperthermia has been investigated as way to open the blood-brain barrier for improved chemotherapeutic drug delivery, but previous methods have involved either invasively removing skull bone via surgery or non-invasively dealing with the high ultrasound attenuation, reflection, and phase aberration resulting from the skull and its variable thickness. Dual-mode ultrasound transducers for image-guided therapy have also been investigated for several applications; in some instances, phased arrays are ideal, allowing control over the ultrasound energy deposition pattern and inherent spatial registration between imaging, treatment, and monitoring.

Additionally, thermosensitive liposomes can be configured to encapsulate drugs and actively target regions of tumor angiogenesis. When used in combination with localized hyperthermia, thermosensitive liposomes can provide targeted control of drug release that may enhance chemotherapeutic efficacy in many clinical settings. Meanwhile, catheter devices and endovascular techniques are used by interventional neuroradiologists to treat various intracranial diseases, including intracranial aneurysm and dural venous sinus thrombosis. These procedures can be extended to the treatment of intracranial tumors (advancement of a 5 Fr catheter as far as the frontal portion of the superior sagittal sinus has been demonstrated).

The objective of the work presented in this dissertation was the realization of a dual-mode catheter transducer for a minimally-invasive, vascular approach to deliver localized, image-guided ultrasound hyperthermia to an intracranial tumor target. Toward this end, a series of prototype ultrasound transducers were designed, simulated, built, and tested for imaging and therapeutic potential.

Two 14-Fr phased-array prototypes were built with PZT-5H ceramic and tested for real-time 3D intracranial imaging and focused-beam hyperthermia capability. These were able to visualize the lateral ventricles and Circle of Willis in a canine model, and generate a temperature rise over 4&deg;C at a 2-cm focal distance in excised tissue.

Single-channel intravascular ultrasound (IVUS) coronary imaging catheters as small as 3.5 Fr were then considered as a construction template; several possible transducer apertures were simulated before fabricating prototypes with PZT-4. The transducers exhibited a dual-frequency response, due to the presence of thickness-mode and width-mode resonances. A thermal model was developed to estimate the +4&deg;C thermal penetration depth for a given transducer aperture, predicting an effective therapeutic range of up to 12 mm with a 5 × 0.5 mm aperture.

A 3.5-Fr commercial mechanical IVUS catheter was retrofitted with a PZT-4 transducer and tested for 9-MHz imaging performance in several animal studies, successfully visualizing anatomical structures in the brain and navigating a minimally-invasive vascular pathway toward the brain. An identical PZT-4 transducer was used to build a 3.3-MHz therapy prototype, which produced a temperature rise of +13.5&deg;C at a depth of 1.5 mm in live xenograft brain tumor tissue in the mouse model.

These studies indicate that a minimally-invasive catheter transducer can be made capable of visualizing brain structures and generating localized hyperthermia to trigger drug release from thermosensitive liposomes in brain tumor tissue.