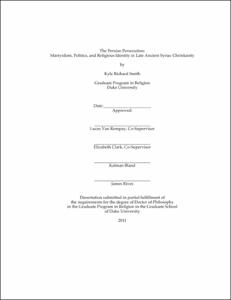 According to the Syriac <italic>Acts of the Persian Martyrs</italic>, the Sasanian king Shapur II began persecuting Christians in Persia soon after Constantine's death in 337 CE. Previous studies of the <italic>Acts</italic> (and related material) set Shapur's persecution within the context of Constantine's support for Christianity in the Roman Empire. Religious allegiances are said to have been further amplified during the Roman-Persian war over Rome's Mesopotamian provinces that followed Constantine's death. According to most interpretations, by the mid-fourth century <italic>Christianitas</italic> had become coextensive with <italic>Romanitas</italic>: Persian Christians were persecuted because they worshipped Caesar's god and, thereby, allied themselves with Rome.

By contrast, this dissertation reconsiders Christian historical narratives, the rhetorical and identity-shaping nature of the martyrological genre, and assumptions about the clear divisions of religious groups in late antiquity. Although the notion of Christianity as a "Roman" religion can be found in some of the historiography of persecution in Persia, our knowledge about Christians in fourth-century Persia is a harmonized event history woven from a tapestry of vague and conflicting sources that often exhibit later religious, political, and hagiographical agendas.

To demonstrate how Shapur's persecution came to be interpreted as the result of religious changes within the Roman Empire, the dissertation first reconsiders how Constantine is imagined as a patron of the Christians of Persia in Syriac and Greek sources. The second part looks at the ways by which constructed imperial ideals territorialized "religion" in the post-Constantinian era. Finally, the third part presents the first English translations of the <italic>Martyrdom and History of Simeon bar Sabba'e</italic>, a fourth-century Persian bishop whose martyr acts are central to the historiography of the period.