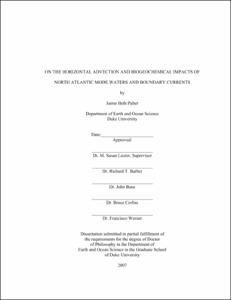 View / Download
4.6 Mb
Date
Author
Palter, Jaime Beth
Advisor
Lozier, M. Susan
Repository Usage Stats
393
views
358
downloads
Abstract
Using a combination of hydrographic data and the trajectories and profiles of isobaric floats, this dissertation evaluates the connections between remote regions in the North Atlantic. First, I establish that the production and advection of the North Atlantic Subtropical Mode Water (STMW) introduces spatial and temporal variability in the subsurface nutrient reservoir of the subtropical gyre. As the mode water is formed, its nutrients are depleted by biological utilization. When the depleted water mass is exported to the gyre, it injects a wedge of low-nutrient water into the upper layers of the ocean. Contrary to intuition, cold winters that promote deep convective mixing and vigorous mode water formation may diminish downstream primary productivity by altering the subsurface delivery of nutrients. Next, the source of elevated nutrient concentrations in the Gulf Stream is assessed. The historical hydrographic data suggest that imported water advected into the Gulf Stream via the tropics supplies an important source of nutrients to the Gulf Stream. Because the high nutrients are likely imported from the tropics, diapycnal mixing need not be invoked to explain the Gulf Stream's high nutrient concentrations, as had been previously hypothesized. Furthermore, nutrients do not increase along the length of the Stream, as would be expected with strong diapycnal mixing.Finally, profiling float data are used to investigate how the Labrador Sea Water enters the Deep Western Boundary Current, one of the primary pathways by which it exits the subpolar gyre. With the trajectories and profiles of an extensive array of P-ALACE floats I evaluate three processes for their role in the entry of Labrador Sea Water in the Deep Western Boundary Current (DWBC): 1) LSW is formed directly in the DWBC, 2) Eddies flux LSW laterally from the interior Labrador Sea to the DWBC, and 3) A horizontally divergent mean flow advects LSW from the interior to the DWBC. Each of the three processes has the potential to remove heat from the boundary current, and both the formation of LSW directly in the boundary current and the eddy heat flux are possible sources of interannual variability in the exported LSW product.
Type
Dissertation
Department
Earth and Ocean Sciences
Subject
Physical Oceanography
Biology, Oceanography
North Atlantic
nutrients
ocean color
Gulf Stream
Labrador Sea Water
Meridional Overturning Circulation
Permalink
https://hdl.handle.net/10161/386
Citation
Palter, Jaime Beth (2007). On the Horizontal Advection and Biogeochemical Impacts of North Atlantic Mode Waters and Boundary Currents. Dissertation, Duke University. Retrieved from https://hdl.handle.net/10161/386.
Collections
More Info
Show full item record