Exploring the Immunogenicity and Therapeutic Applications of Boranophosphate-modified RNA: siRNA and RNA Aptamers 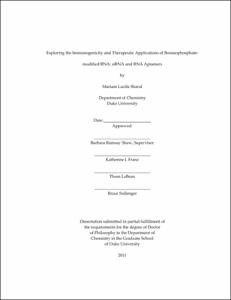 Borane (BH<sub>3<sub>) chemistry offers unique chemical characteristics that enable boranophosphate (BP) oligonucleotides with potential to enhance RNA therapeutic applications such as RNA interference (RNAi) and RNA aptamers. Further, BP nucleotides are substrates for RNA polymerases which allow the enzymatic synthesis of stereoregular boranophosphate (BP)-RNA molecules of different lengths and properties. We expect that these BP-RNAs will interact in a novel way with the desired target molecules because they can coordinate with a diverse array of ligand sites in proteins or other RNA molecules. This is due to the distinct hydrophobicity, sterospecificity, and polarity properties imparted by the phosphorus-boron (P-B) chemical bond compared to the natural phosphorus-oxygen (P-O) bond.

The object of this dissertation is to explore the therapeutic applications of the BP-RNA such as siRNA, RNA aptamers, and in addition investigate the immunogenicity of this modification. We used mouse cells to determine if BP-RNA would activate toll-like receptor (TLR 7), which is involved in innate immune response to foreign single stranded RNA (ssRNA). This response is undesired when applied to oligonucleotide therapeutics such as siRNA and RNA aptamers. In terms of RNAi, it would be an advantage to have low immunogenicity and high downregulation activity by the siRNA. To determine the innate immune activation of the BP-RNA through the TLR 7 we used a known activator, the human immunodeficiency virus (HIV) derived single-stranded RNA (ssRNA40) and measured the production of cytokines as a function of the number of modified BP-linkages. The production of cytokines IL-6 and TNF&#945; was quantified after the boranophosphate (BP), phosphorothioate (PS) or natural ssRNA40 were transfected into murine macrophage Raw264.7 cells. Natural and phosphorothioate RNA (PS-RNA) have been shown to be activators of TLR 7 receptors. In contrast, we found that fully modified BP- ssRNA40 did not activate TLR 7. This is relevant in oligonucleotide applications such as siRNA and RNA aptamers where off-target effects such as immune activation after administration are not desired.

Subsequently, the low immune activation would be an advantage when coupled to RNAi activity of the oligonucleotide. Thus, we explored whether BP modified siRNA molecules would modulate gene expression and if there was an effect on downregulation activity when increasing the number of BH3 modifications on the phosphate backbone. Our therapeutic model was the multi-drug resistance 1 (MDR1) gene that expresses P-glycoprotein (P-gp), which has been notoriously difficult to modulate. The aberrant regulation of genes such as MDR1 in cancer cells are a major cause of chemotherapeutic treatment failure against human cancers. Hence, controlling the expression of cancer genes with antisense technology is a possible cancer therapy. Specifically, correcting the overexpression of p-glycoprotein using modified siRNAs that target and degrade the P-glycoprotein mRNA produced by the MDR1 gene. We found that there is a reduction of siRNA activity with an increasing number of BP-modifications. It appears that there is a fine balance between lack of immune response and gene downregulation when applied to BP-siRNA.

Finally, we compared the enrichment during the Systematic Evolution of Ligands by EXponential enrichment (SELEX) method of two libraries, one BP-RNA (U&#945;B) compared to a doubly-modified RNA (2'FC & U&#945;B), against a human thrombin. Aptamers modulate protein activity and interfere with protein signaling by binding to the desired protein with high affinity and specificity leading to their use in therapeutic applications where protein activity needs to be controlled or it is anomalous. In the case of blood coagulation, thrombin plays a central role in coagulation signaling cascade and it is a good target to use to control blood coagulation in clinical settings. We attempted to optimize the selection of BP- RNA aptamers through 4-8 rounds of SELEX against the protein thrombin. We found that the selection conditions were not optimal for BP-RNA SELEX possibly due to non-specific binding to a bovine serum albumin (BSA) in the selection buffer.