Neuronal and Molecular Basis of Nociception and Thermosensation in Drosophila melanogaster 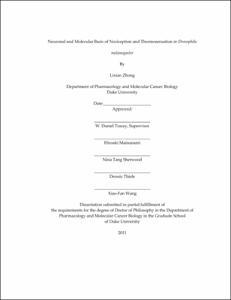 From insects to mammals, the ability to constantly sense environmental stimuli is essential for the survival of most living organisms. Most animals have nocifensive behaviors towards extreme temperatures, mechanical stimuli or irritant chemicals that are considered to be noxious. Nociception is defined as the neural encoding and processing of noxious stimuli. This process starts from the activation of pain detecting peripheral sensory neurons (nociceptors) that can detect noxious mechanical, thermal or chemical stimuli. On the other hand, animals also have the ability to discriminate innocuous temperatures and to direct their locomotions to their favorable environmental temperatures and this behavior is called thermotaxis.

In this study, I used <italic>Drosophila melanogaster</italic>as a genetic model organism to study the molecular and cellular basis of nociception and thermotaxis. <italic>Drosophila</italic> larvae exhibit a stereotyped defensive behavior in response to nociceptive stimuli (termed nocifensive escape locomotion behavior, NEL). Using this behavior as a readout, we manipulated the neuronal activities of periphery sensory Type II multidendritic neurons and have identified a specific class of neurons, class IV multidendritic neurons, to function as nociceptors in <italic>Drosophila</italic> larvae.

After identifying the nociceptors, I next investigated several ion channels that are critical molecular components for larval nociception. The Degenerin Epithelial Sodium Channel (DEG/ENaC) protein called pickpocket (ppk) is required specifically for larval mechanical nociception but not for thermal nociception. Being specifically expressed in class IV multidendritic neurons (the nociceptors), pickpocket is likely to function as a first detector of mechanical stimuli and upstream of general neuronal action potential propagation. In addition, I have found that the <italic>Drosophila</italic> orthologue of mammalian TRPA1 gene, <italic>TrpA1</italic>, is required for both mechanical and thermal nociception in <italic>Drosophila</italic> larvae. I have cloned a new isoform of dTRPA1 and have found it to be specifically expressed in class IV md neurons. Unlike the known dTRPA1 isoform that is warmth activated, this new isoform is not directly activated by temperatures between 15-42 °C. Instead, it may function downstream of sensory transduction step in the nociceptors.

Interestingly, <italic>dTrpA1</italic> mutants are also defective in their thermotaxis behavior within innocuous temperature ranges. In addition to the previously reported defects in avoiding warm temperatures, I have found these flies also failed to avoid cool temperatures between 16-19.5 °C. This defect is likely to be mediated by temperature sensing neurons in the antennae. I have detected antennal expression using a GAL4 reporter of dTrpA1. Significantly, these neurons exhibit elevated calcium levels in response to cooling. dTrpA1 mutants have a premature decay of the cooling response at temperatures below 22 °C during a cooling process. I have also identified another population of cells in the antennae that can respond to temperature changes. These neurons express the olfactory co-receptor Or83b and are known to be olfactory neurons. Calcium oscillations triggered by cooling were detected in these neurons and they were terminated by warming. Severe behavioral defects in avoiding cool temperatures were found in animals lacking <italic>Or83b</italic>. Our results suggest that there are multiple pathways regulating cooling sensation in the fly antennae.

Taken together, I have shown that <italic>Drosophila</italic> serves as a great model system to study nociception and thermosensation at molecular, cellular and behavioral levels.