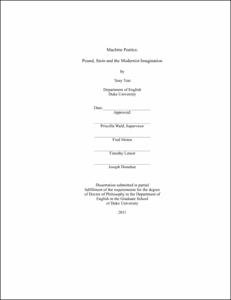 This dissertation intervenes in the fields of modernist criticism and new media studies to examine an under-appreciated reciprocity between them. I argue that this reciprocity has not yet been adequately incorporated into a critical reckoning of the modernist period, a literary age too often neglected by new media studies as an epoch of "old media" productions. Even if modernist poets did create works largely intended for traditional book-bound channels, the imaginations that produced those works were forged in the combustible mix of new media and technologies that emerged in the early 20th century.

The argument focuses on the poetics of Ezra Pound and Gertrude Stein, innovative poets who composed some of the most prescient, insightful writings on record about the connections linking technological and poetical developments. Through an examination of these poets' speculative writings, I argue that their experimental poetic methods emerged from their understanding of the challenges posed by new media and technologies. Among these challenges were new velocities of signification that emerged with the proliferation of the telegraph, new capacities for the storage of information that arrived with the introduction of the phonograph, an altered relationship to language itself with the externalized alphabet of the typewriter, and a new feel for how meaning could be generated through the montage logic of the cinema.

Drawing on a critical perspective derived from Martin Heidegger, pragmatist philosophers, Frankfurt School theorists and new media scholars such as Friedrich Kittler and Marshall McLuhan, I examine how modernist poetry, when framed as a media event, can help us understand how technological and media shifts influence our conceptions of our own inner and outer domains.