Establishment and Growth of a Sea Turtle Rookery: the Population Biology of the Leatherback in Florida. 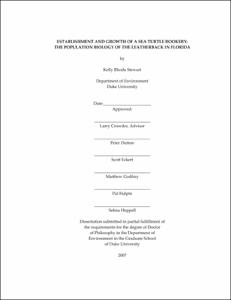 View / Download
1.5 Mb
Date
Author
Stewart, Kelly
Advisor
Crowder, Larry
Repository Usage Stats
422
views
1,321
downloads
Abstract
Despite facing threat of extirpation in the eastern Pacific, the critically endangered leatherback turtle (Dermochelys coriacea) appears to be thriving in the Atlantic. The purpose of my dissertation was to establish a baseline of biological data for the leatherback at the northern limit of its nesting range in the northwestern Atlantic (Florida) to inform management. From six years of empirical field data collected on nesting female leatherbacks, I addressed four major objectives of the Federal (US) Recovery Plan for the east coast of Florida. 1) I determined the rate of increase in observed nest numbers since standardized nest surveys began in 1979. From these data collected at 70 beaches and using a multilevel modeling approach, I found a dramatic increase of 11.3 Â± 1.9% each year in the number of nests. 2) By tagging and recapturing individual females as well as marking nests for inventories at one high-density nesting beach, I determined several critical population parameters. The annual survival rate was 95.6% for nesting females and the yearly nesting population size was 71 Â± 23 turtles at my Juno Beach study site (19.4 km); statewide the estimate will be higher. The average remigration interval was 2.2 +/- 0.5 years, clutch frequency was 4.1 +/- 0.9 nests/season, and the average clutch size was 69.0 +/- 18.2 eggs/female. 3) I used novel GPS tags and conventional tag returns to discover the full nesting range and true clutch frequency of individual turtles. Leatherbacks in Florida exhibit weak nest site fidelity by nesting at broad spatial scales, distributing at least five nests within a single season up to 139.8 km from first encounter. 4) Finally, I used microsatellites and mtDNA to determine the relatedness of leatherbacks in Florida and found few family groupings, indicating that this rookery has been established through immigration and not through a founding event, as there is no evidence of a genetic bottleneck. Although the Florida population is relatively small compared to other Caribbean mainland rookeries, it has the potential to contribute to further increases of leatherbacks in the Atlantic as well as contributing genetic variation, thereby achieving objectives of the US Recovery Plan.
Type
Dissertation
Department
Environment
Subject
Biology, Ecology
Permalink
https://hdl.handle.net/10161/391
Citation
Stewart, Kelly (2007). Establishment and Growth of a Sea Turtle Rookery: the Population Biology of the Leatherback in Florida. Dissertation, Duke University. Retrieved from https://hdl.handle.net/10161/391.
Collections
More Info
Show full item record