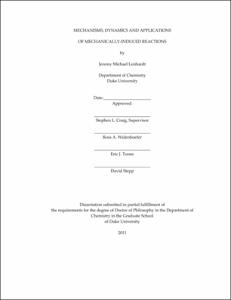 The mechanical forces typical of daily life have the potential to induce dramatic reactivity at the molecular level. In the past few years, several studies have demonstrated that macroscopic mechanical forces can be harnessed at the molecular level, creating a new tool for the organic and materials chemist alike. These studies have created a new opportunity to develop novel, responsive materials by designing and synthesizing mechanically activated functional groups ("mechanophores") and incorporating them as stress-sensing and/or stress-responsive elements in materials.

The addition of dihalocarbenes to polybutadiene polymers forms polymeric materials that are highly susceptible to mechanochemical transformations. The mechanochemistry of the as formed gem-dihalocyclopropanated (gDHC) polymers is reported herein. The mechanochemical transformations of gDHC polymers are investigated (i) during activation in solution by the application of pulsed ultrasound, (ii) by single molecule force spectroscopy and (iii) in the solid state as a result of compressive stress.

Solution state mechanochemistry first observed during pulsed ultrasonication of gem-dichlorocyclopropanated (gDCC) polybutadiene polymers. The electrocyclic ring opening reactions of up to hundreds of gDCCs are observed on the timescale of molecular weight degradation from C-C bond scission. Mechanistic insights into the shear-induced mechanochemical transformations are obtained by monitoring the mechanochemistry as a function of gDHC halogen (dichloro-, dibromo-, bromochloro- and chlorofluoro-) and stereochemistry. The relative susceptibility of the anti-Woodward Hoffman and anti-Woodard-Hoffman-DePuy ring opening reactions through conventional pathways is explored, as is the relationship between mechanophore activity and initial polymer molecular weight.

The irreversible ring opening reaction of cis-gem-dibromocyclopropane is quantified as a function of mechanical restoring force through single molecule force spectroscopy experiments. The force-induced rearrangement proceeds at forces below covalent scission leads to a dramatic increase in the toughness of single polymer chains. Kinetic data are extracted from the force-induced rearrangment, the analysis of which reveals challenges in deconvoluting the proper reaction coordinate in force-induced reactions in polymers.

In the solid state, compressive stress is observed to induce the ring opening reactions of gDCC, gDBC and gem-bromochloro (gBCC) embedded polybutadiene polymers. Analysis of the 1H-NMR spectra following compressive activation of the materials allows the mechanoactive domains along single polymer chains to be characterized, with domain sizes on the order of only a few (3-5) monomers. The ring opening reactions of isomeric gBCCs are observed to proceed at different rates, providing the first quantitative study of selectivity in competing mechanochemical reactions in the solid state.

Transition state structures are central to the rates and outcomes of chemical reactions, but their fleeting existence often leaves their properties to be inferred rather than observed. By treating polybutadiene with a difluorocarbene source, we embedded gem-difluorocyclopropanes (gDFCs) along the polymer backbone. We report that mechanochemical activation of the polymer under tension opens the gDFCs and traps a 1,3-diradical that is formally a transition state in their stress-free electrocyclic isomerization. The trapped diradical lives long enough that we can observe its noncanonical participation in bimolecular addition reactions. Furthermore, the application of a transient tensile force induces a net isomerization of the trans-gDFC into its less-stable cis isomer, leading to the counterintuitive result that the gDFC contracts in response to a transient force of extension. Additionally, the bimolecular reaction of adjacent, tension trapped 1,3-diradicals was monitored resulting in the first example of a reaction between two formal transition state species.